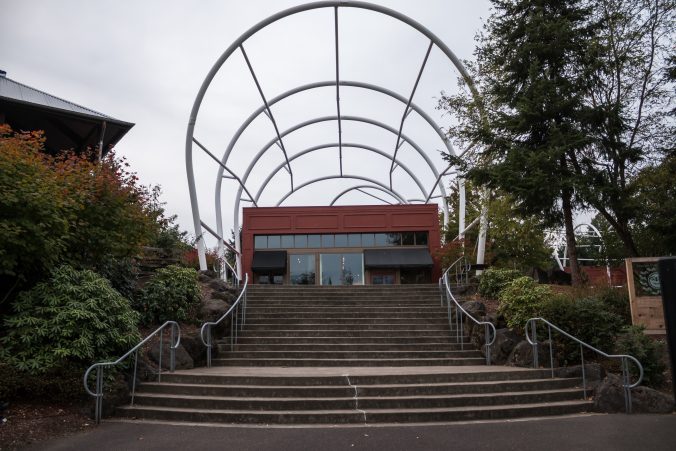 Where you can die of dysentery or typhoid or cholera with just the push of a button..

The official end of the OregonTrail is in Oregon City. It used to be called Abernathy Green and was a trading post and popular destination for Oregon Trail travelers.

The center was made to look like a curved wagon train with multiple buildings attached end to end in a semi circle. I’ve seen pictures when the structures were covered like a wagon but today they are bare. 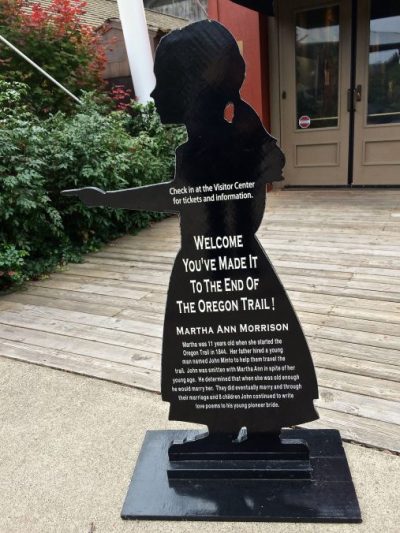 The first room is decorated like a store. A plywood wagon bed sits on the floor and canvas bags line the shelves. It looks as if school groups come in and the kids have to decide how much to load in the wagon.

Displays of spices, a small prairie school and some cooking displays fill out the room. Most of it is geared toward school age kids. 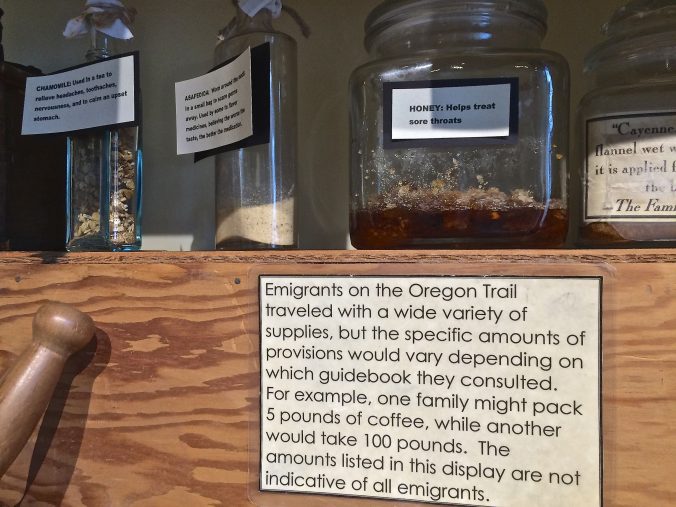 It’s apparent that this is an Interpretive Center (just as advertised) and not a museum. There are a lot of opportunities for hands on activities such as a station for candle making.  The docents dress in period clothing.

Here you’re encouraged to dress as a pioneer and take pictures. 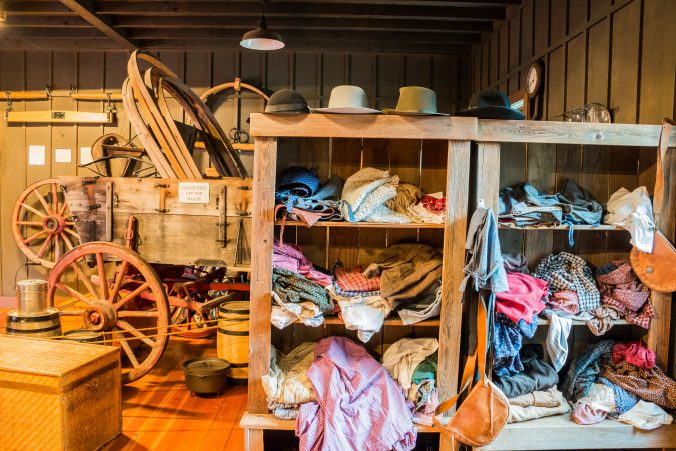 The artifacts all have typewritten descriptions taken from the internet. 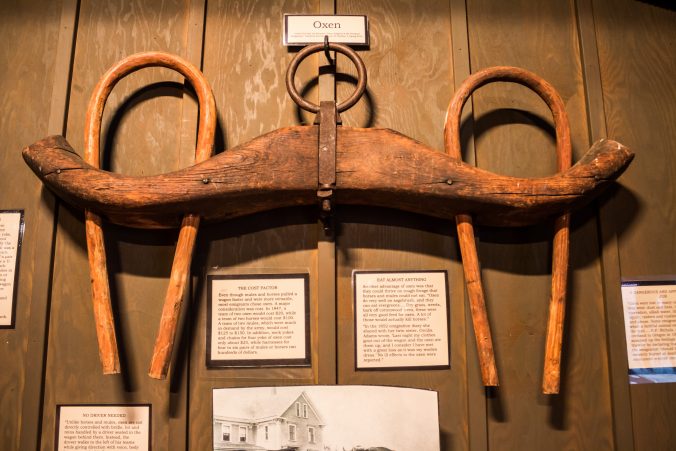 There’s a theater which shows some kind of film but they were repairing it.

The most impressive room in the place is this “store room” with an interactive question and answer game on the screen. 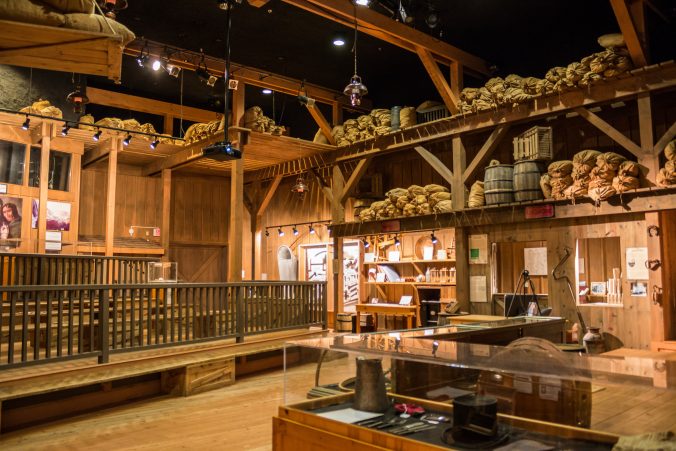 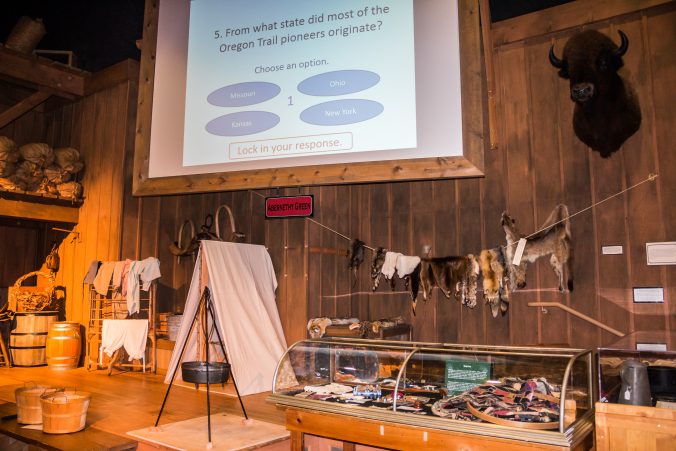 While the information was interesting, I don’t believe it was worth $11.00 for a couple of grown ups just passing through. However, if I were going to design a place to interest kids in learning about the Oregon Trail, I would make it like this. It’s definitely designed for field trips.

We didn’t ask the docents if we could make candles or play the games, though I think they would have indulged us, they were very nice.

So we bid farewell to the Oregon Trail and went in search of Willamette Falls.

As we approached the turnout on highway 99 to view the falls we passed by a lot of decrepit industrial buildings.  They had so much character I was practically screaming stop, I have to take pictures!!! (There is a lot of fast moving traffic on this road so use caution).

This is my first cell phone overview of the area. The industrial buildings stretch downriver to the right, out of view. 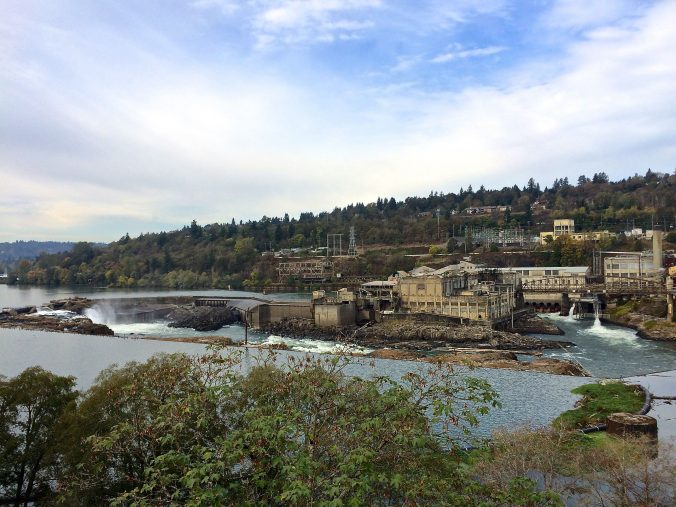 At the overlook is a sign telling what each structure is and the history of it. It’s an absolutely fascinating, patchwork quilt of industrial buildings, built one on top of another over the last hundred and fifty years. 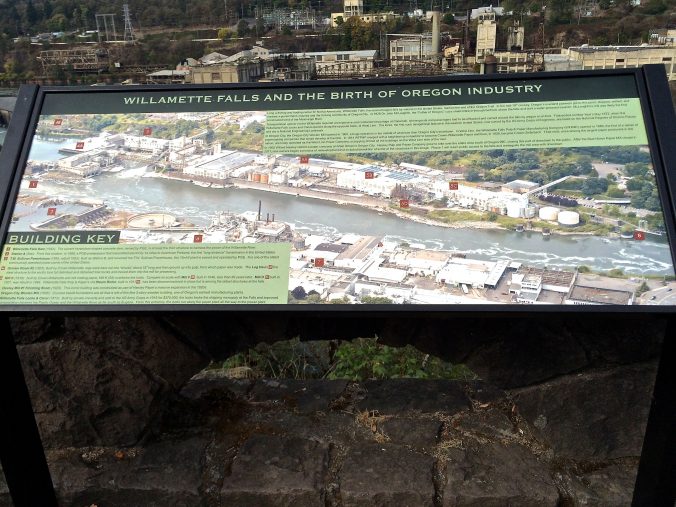 Close ups of the falls with minimal water this time of year. 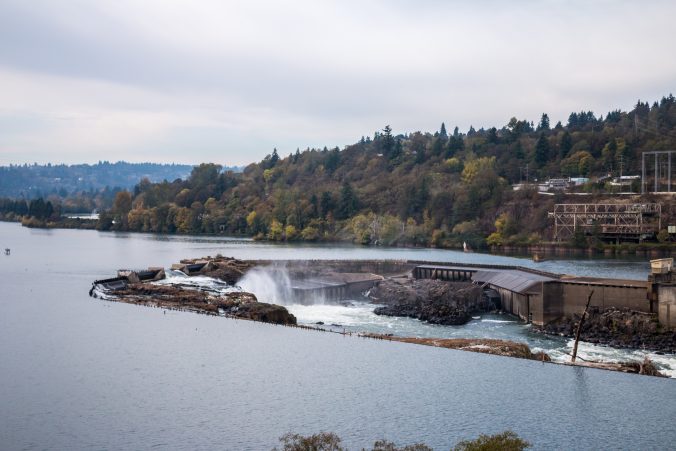 Typically Willamette falls is second in North America to Niagara Falls in terms of the volume of water that flows over it.

Here are some of the structures.

Blue Heron paper mill consists of 50 buildings cobbled together from other paper mills and woolen mills that have been built on the site over the years. It closed in 2011 and was recently auctioned off for redevelopment. 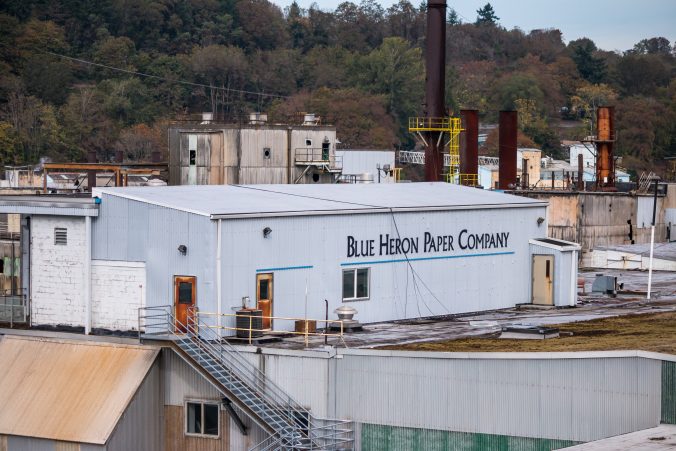 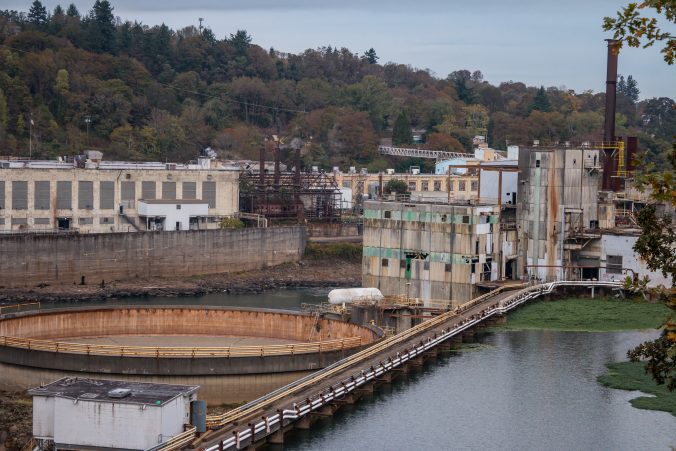 There is still one paper mill operating on the site as well as a power generating station but what all these buildings are or do, I have no idea. 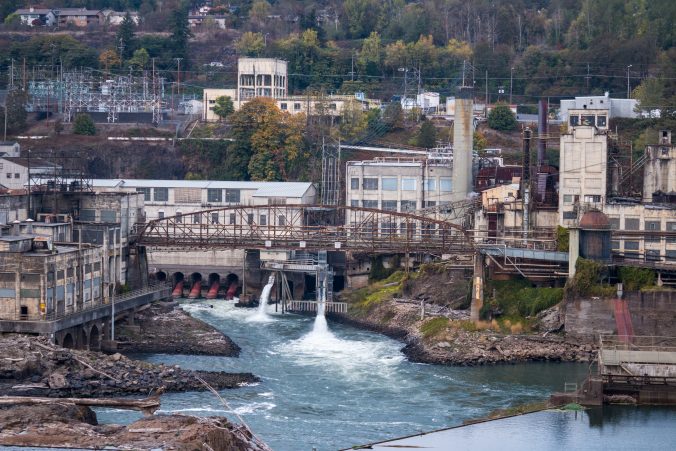 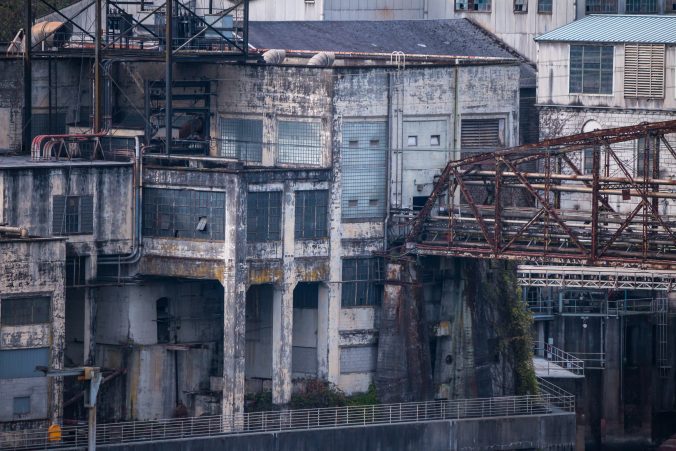 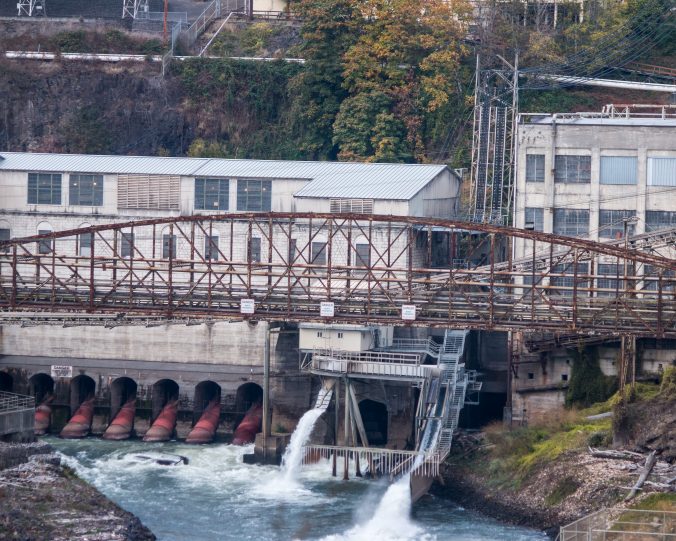 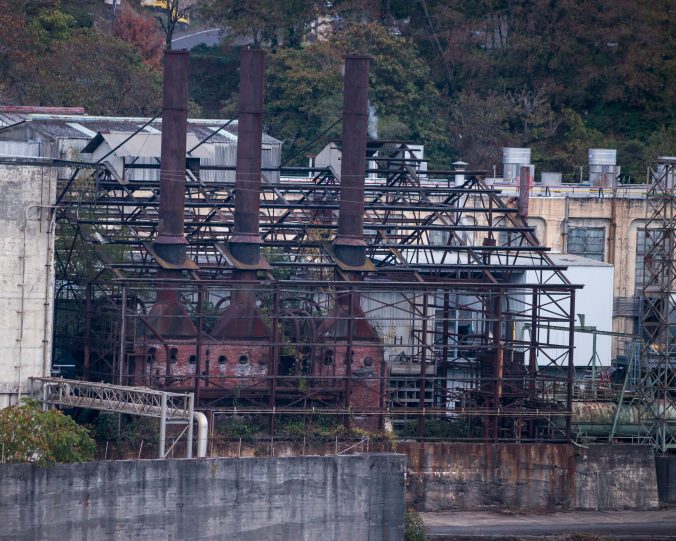 If I understood the informational map correctly, the smokestacks above are the oldest structures remaining. 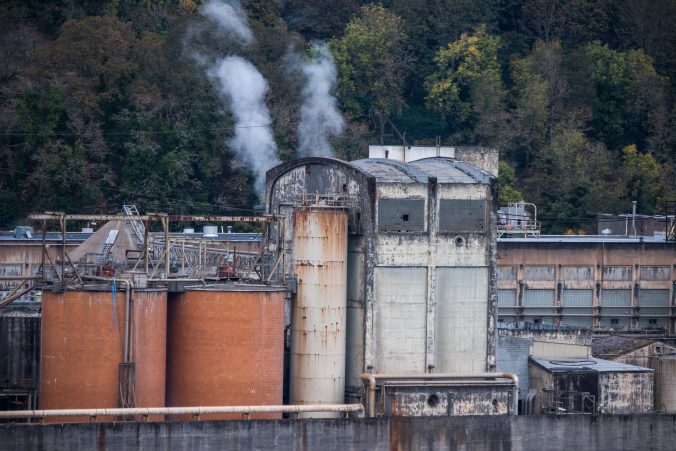 The entire river is like a hidden picture book, everywhere you look there’s another little nook or cranny with moss, or rust, or branches, or interesting machines.

When we started out this morning our original destination was the Linn County Covered Bridges Tour.  It’s a self guided, driving tour of covered bridges.

We decided to backtrack to highway 213 south from Willamette Falls. We needed to get to Albany in order to follow the covered bridge tour and rather than take the 5 freeway we wanted something more scenic.

In hindsight this may have been a mistake. The road wound through mostly picturesque farm and ranch land. There would have been farm stands during the growing season but everything was bare this time of year.

It would have been okay if this drive was the only thing we had done all day but it ended up taking longer than anticipated. In the end we lost the scenic road and had to take the 5 anyway.

Finally in Albany we started following our “tour directions” and were happy to find actual “covered bridge tour route” signs along the way.

Here’ s the first bridge, the Hoffman bridge, built by hand in 1936. 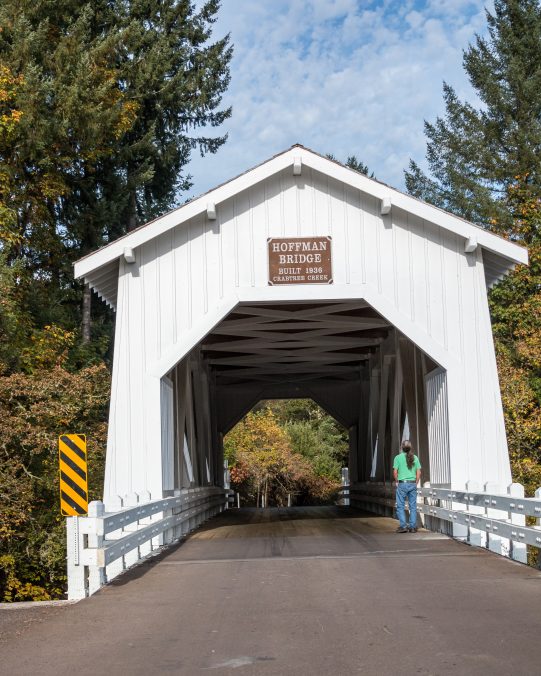 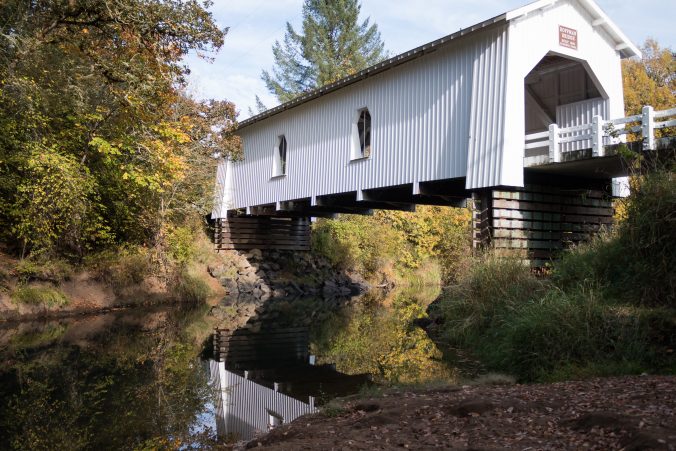 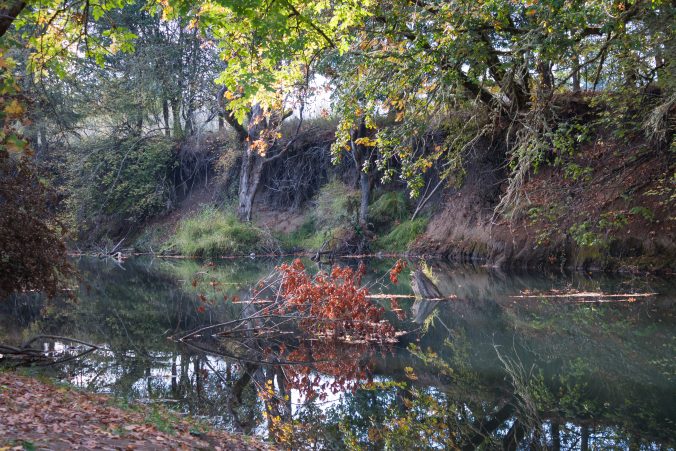 It has gothic style windows and sits over a beautiful blue/green creek.

It’s easy to get down to a little beach underneath to take pictures.

A perfect spot but it’s a popular place with photographers. Luckily we were able to get pictures before the crowd arrived.

The tour continues by driving over the bridge and after winding through some charming little towns we made it to the second one.

Gilkey Bridge, built in 1939, spans the creek right next to a railroad bridge which was also covered until 1960 when the cover was removed. 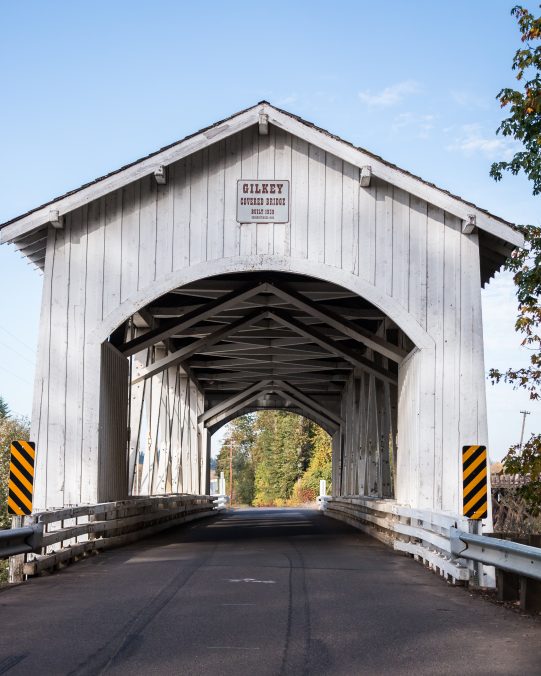 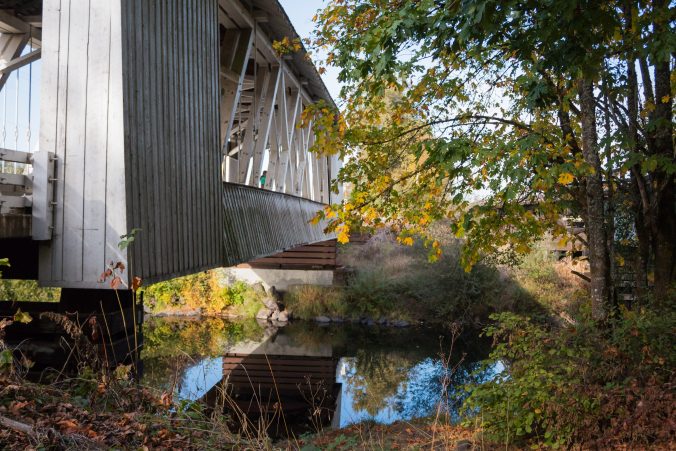 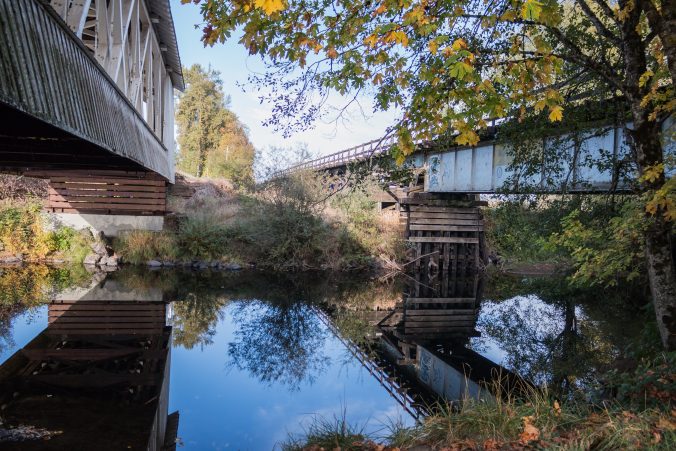 It was also easy to get under and around to take pictures and it seemed to be in an area with less traffic than the Hoffman bridge. I also found it interesting that the train bridge was right next to it.

After crossing it and continuing the tour, things went downhill from there.

Shimanek bridge was next on the list. It could have been one of the most photogenic with its louvered windows and red color but the traffic over it was ridiculous! Multiple cars crossing at such high speeds I was afraid to get near it. There’s no way to get around it or under it. We had to drive down a side street just to find parking to take a picture.

This was the best I could do. 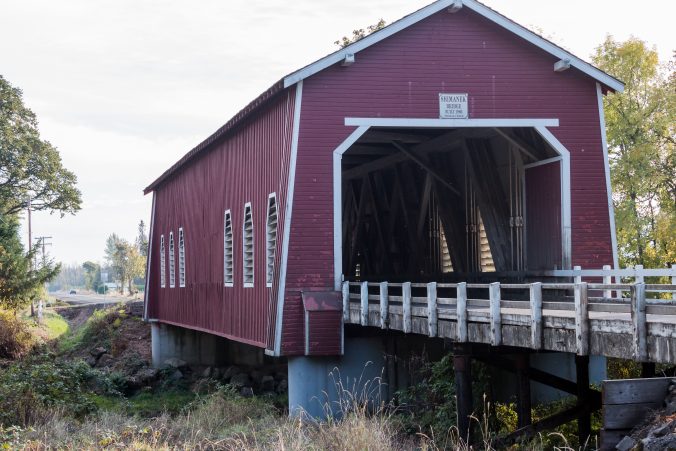 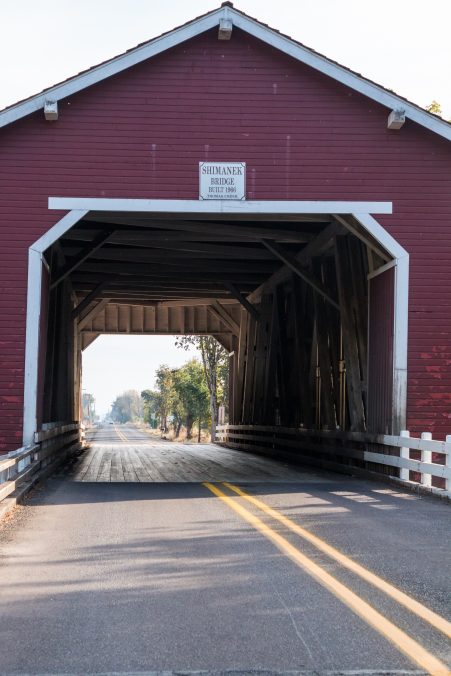 Next on the tour was Hannah Bridge. This part of the drive was probably my favorite as it traveled through a lightly forested area which I thought was pretty.

The bridge spans a deep sided, rocky creek with absolutely no good place to take a picture. You can’t get under or next to it due to the cliff. Any picture you take through it has road signs visible because of a sharp curve on the other side. 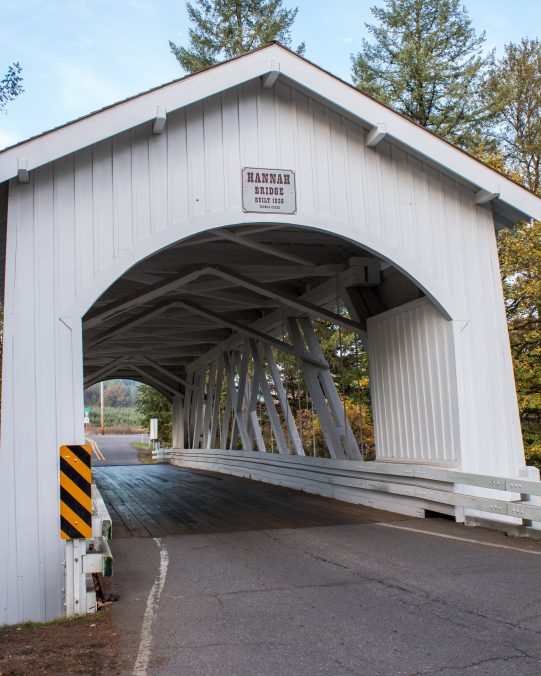 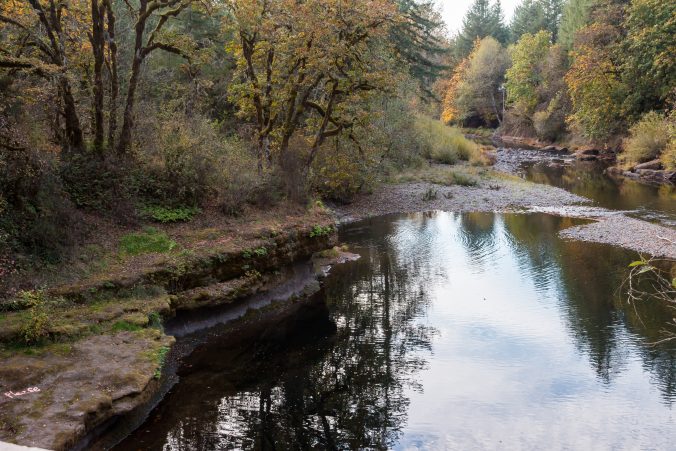 For the next stop our directions say to turn around and head back the way you came instead of crossing Hannah Bridge.

The last bridge on the tour route according to the signs is the Larwood bridge. This bridge is located in a public park area and was the toughest to photograph because of other photographers. There was someone doing a photo shoot near the stream below the bridge and one young, amateur photographer and her subject using the interior of the bridge. They just stayed inside taking picture after picture and wouldn’t move despite the fact that it was obvious other people, ourselves included, would like to walk onto the bridge.

I gave up and took pictures of the top and side as best I could. 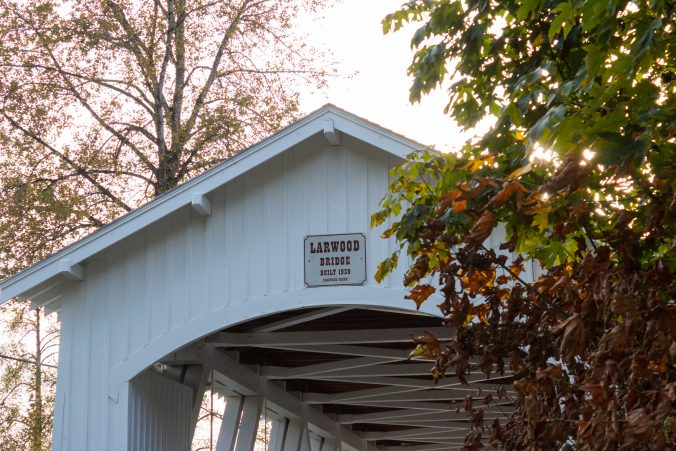 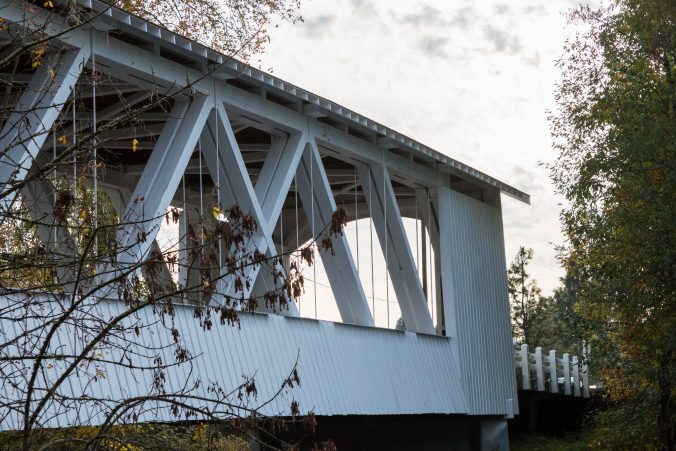 This is where the tour ends as far as the road signs are concerned but the list of bridges on the internet showed three more. It was dusk but not completely dark yet so Jeff voted to keep going.

We should have left well enough alone when the directions said to drive all the way to Sweet Home.

The map said it was a 20 minute drive.

It’s at least 30 minutes and we quickly realized we were headed back up into the mountains on the back side of Sisters.

But we kept going and drove into the town which was cute but seemed to have a seedy feel to it.

We found the bridge and realized that it was located in a park and this park happened to be the hang out for the local teenagers, skateboards and all. They were all over it hanging around with their pit bull tied up on the bridge too. The area seemed a little questionable and I didn’t feel very comfortable as more teenagers arrived in cars.

We’d come so far I was determined to get a picture anyway!

Weddle bridge which was built in 1937 and relocated and restored in 1990. 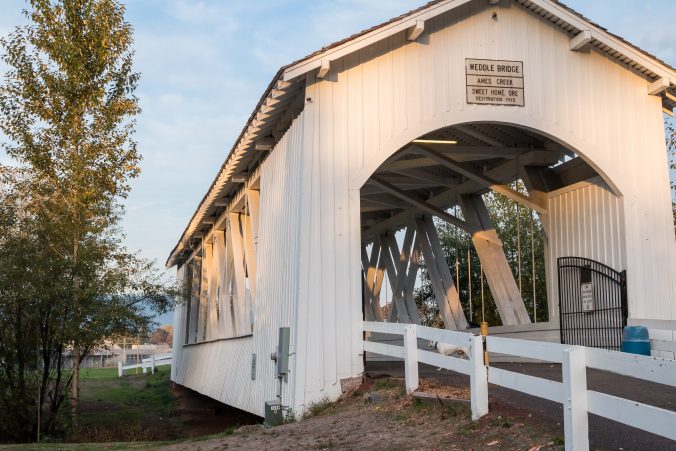 Note the trash can and iron gate and tied up pit bull.

Not exactly a country bridge.

By this time I was over bridges and we had a long drive home so we left. We gave up on finding the last two bridges wherever they were.

My advice to anyone wanting to do this tour. Go see the first two bridges and forget the rest. It was not the idyllic tour I had envisioned. Most bridges are heavily used in one way or another and not the quiet countryside bridges of the Eastern U.S.

For us It was back to Albany and the 5 freeway, driving home in the dark.

About halfway home to our camp in Corbett, Jeff saw a building next to the freeway with a sign that said World Of Speed.

He wondered aloud what it was so I looked it up on my phone.

According to the internet it’s a new museum dedicated to race cars and speed trials.