Today our intrepid explorers attempt to ascend the mountains in the Cascade range via Sisters Oregon, through the Santiam Pass and the Mackenzie Pass.

We are told that the latter half is not for the faint of heart.

We got an early start this morning and left the park around 9 AM headed for Sisters Oregon from Metolius driving south on highway 97 and west on highway 126.

After 15 miles or so we came to a bridge over a deep canyon and the Peter Skene Ogden State Scenic Point.

It’s a pretty deep chasm and these signs line the edge. 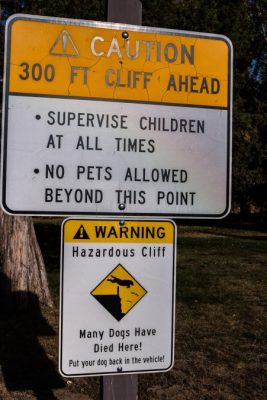 A short rock wall at the edge of the cliff,  built in 1926 is all the protection there is.

There are three bridges here. 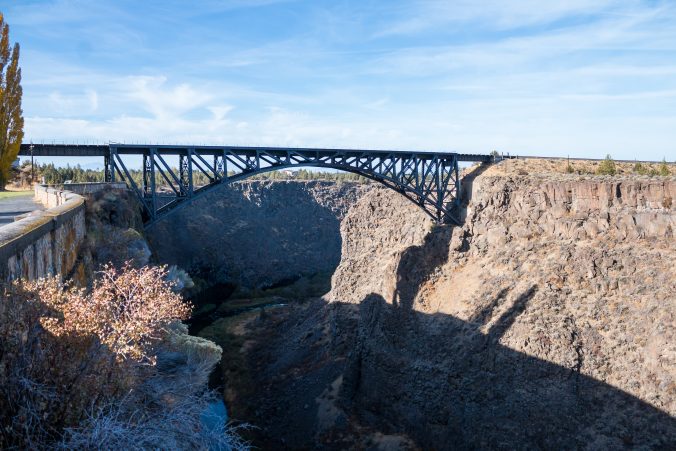 The view is spectacular. The old bridge is now a pedestrian bridge to nowhere.  This is technically The Blue Star Memorial Highway, dedicated to Veterans and there is a nondescript little P.O.W. memorial at the end of the bridge. At the front of the bridge is also a wonderful, memorial display honoring local hero Rex T. Barber. 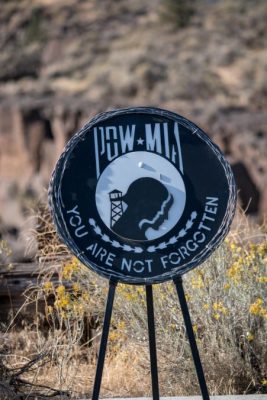 Next to the memorial are stairs and a trail that goes down under the old bridge. Perhaps so you can look up and marvel. “They sure don’t make ’em like they used to.” 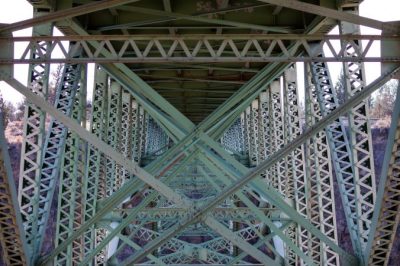 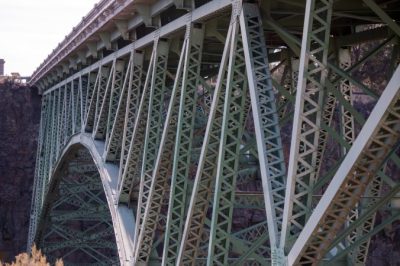 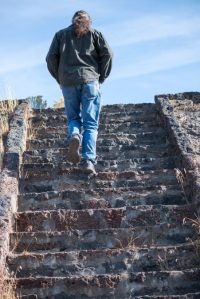 After the bridges, it was on to Sisters.

The town of Sisters is very charming. Every building is western themed, some are authentic and some new.  While it’s most definitely a tourist town, it’s well kept, clean and full of art. There are multiple public bathrooms and parks everywhere. 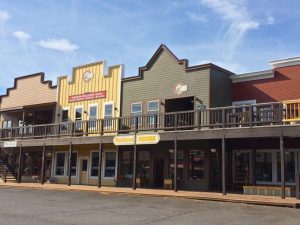 We found a free sculpture park and gallery with over 20 intricate, large, metal, sculptures. They do ask for a $1.00 donation to take a picture in the coach. It looked like you could watch the artist at work through windows in the back of the building though no one was there today.

It was lunchtime so we ate a diner called The Gallery. They served the usual sandwiches and burgers. I had a French Dip and Fries which was quite good.

The first stop was an overlook of Suttle Lake. Signs told of three fires in 2002 – 2003  that decimated the area

The lake is actually that color.

The area was beautiful despite the fire damage.

Our next stop was Clear Lake. I understand this lake is so clear you can see trees under the water but we only stopped briefly. It’s the off season, though there were a couple of boats on the water. It’s beautiful and clear even from the shore.

The Sahalie Falls overlook was a magical fairy land of  moss and ferns, crisscrossed with beautiful wood and stone pathways.

When you come to the falls themselves… 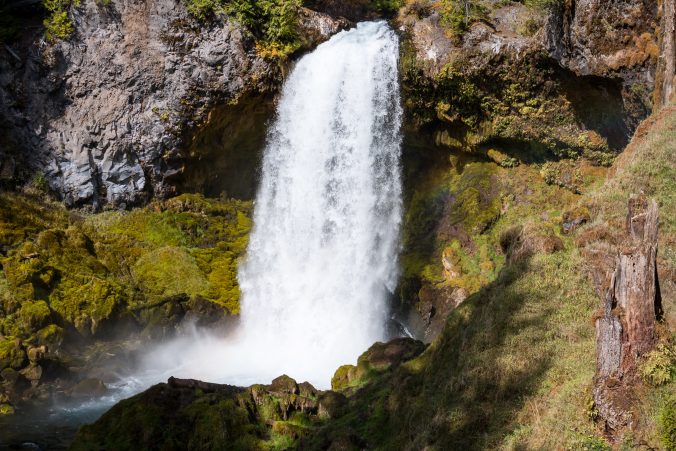 Koosah falls is a little farther down the road and a little harder to see but still lovely.

When we came to the cutoff for the Mackenzie pass we were met with a sign which stated “Historic Highway no vehicles over 35 feet.”

This is a picture of the route on our GPS. 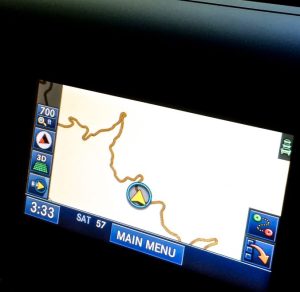 This is the narrowest, twistiest most beautiful road ever.  The entire area is very similar to Hawaii. I tried to take pictures out the window but I couldn’t focus due to the constant turns.  At the time we drove it, there were no guardrails, only posts. There were a few white knuckle moments due to very steep cliffs.  When we finally came out on the top we were met by an extensive lava flow, whose name escapes me at the moment. We thought it was pretty impressive until we drove a little further and found ourselves surrounded by lava on all sides as far as the eye could see. 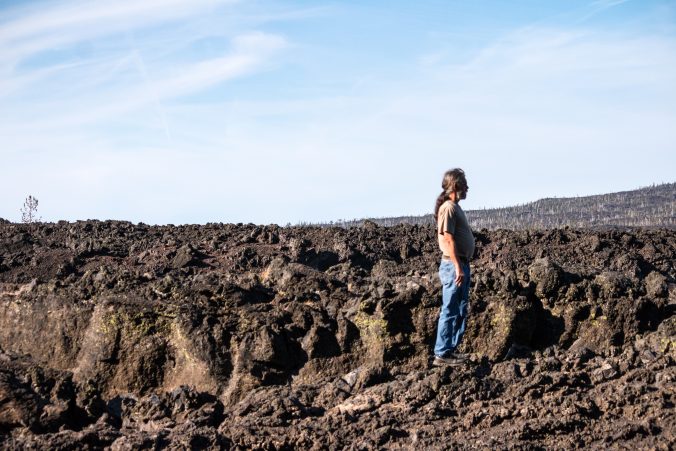 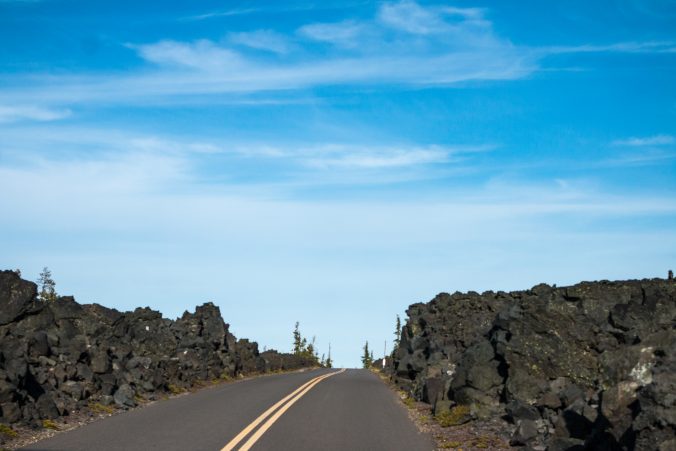 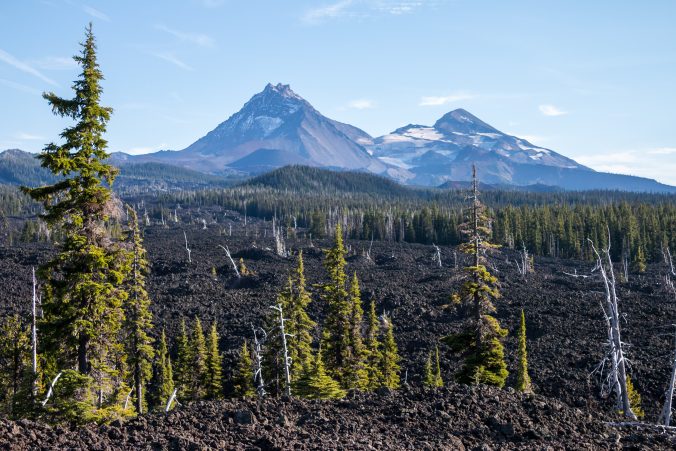 A beautiful view of the Sisters mountains, Faith, Hope and Charity.

…and at the very tip top is the Dee Wright Observatory.

If I were an evil villain I’m pretty sure this would be my hideout.

The view from the top is lava, lava everywhere.

Inside the observatory are multiple windows and cutouts with views of the mountains. Each cutout has the name of a mountain which is centered in the cutout and also the larger windows.

At the base of the observatory is a paved half mile loop, river of lava, trail. There are informational signs along the way describing the various types and ways the lava flowed. We walked this trail in late afternoon in October and it was windy and cool. I would NOT want to walk it in summer with all that black absorbing the heat! At one point the trail leads into a steep lava canyon which is not wheelchair friendly.

YOU SHALL NOT PASS!

This is the lava canyon. Very shadowy and mysterious.

Looking back at the observatory.

Once again it was getting dark and we’d driven a long way, it was time to head home. On the way back down we decided that pizza sounded good so we stopped at a local place in Madras, called Abby’s. They had “build your own” style pizza and gluten free crust so I added a bunch of vegetables to mine. It was fantastic! Jeff is a pepperoni purest and he wasn’t that impressed but for those of us who like fresh ingredients it was great.

Well that’s it for another day, until we meet again…