Sometimes, in life, it’s good to take some time to think about your priorities.

One of the best times for soul searching, is while driving down a lonely desert road.

The road between El Paso and Big Bend is perfect for deep reflection. It was while on this road that one thing became crystal clear to me, fashion has never let me down. Human beings become attached, they’re emotional, but give me a designer bag or a cute pair of pumps, no disappointment there. The pumps don’t talk back, the handbags stay where you put them. They’re always on hand to make you feel better, more beautiful.

As we drove on, I was lamenting the fact that I was about to enter a desolate wilderness with nothing new to wear.

No new shoes or handbags, no designer jeans or cashmere sweaters.

The coyotes howled, the wind blew tumbleweeds across the road, when suddenly from out of the desert haze there appeared a mirage. 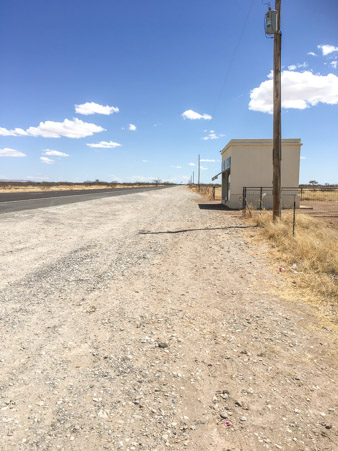 PRADA! My prayers have been answered! 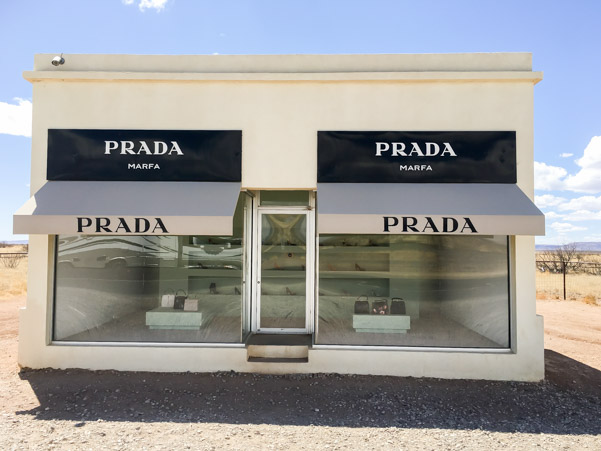 Time to do some shopping!

These bags are from the 2005 collection!

Guess I won’t be shopping here!

All kidding aside, Prada, Marfa is a permanent art installation next to Highway 90. The doors cannot be opened. It contains real merchandise from the 2005 season.

If a fake store in the middle of the desert is your idea of the perfect place to declare your undying love to your significant other, Prada, Marfa’s got you covered…

Here is a roadside view of a border control, Aerostat blimp, grounded. Previously we saw one in the air. It’s much bigger than we thought.

The Aerostat program has been responsible for reducing illegal flights into the US from 8,500 a year to only 10 per year. Pretty impressive!

We’re staying at Big Bend RV Park, a few miles outside the national park entrance. This place has all bases covered, it’s an RV park, gas station, cafe and motel. The sites are hard packed dirt and we were met with a dust storm when we arrived. 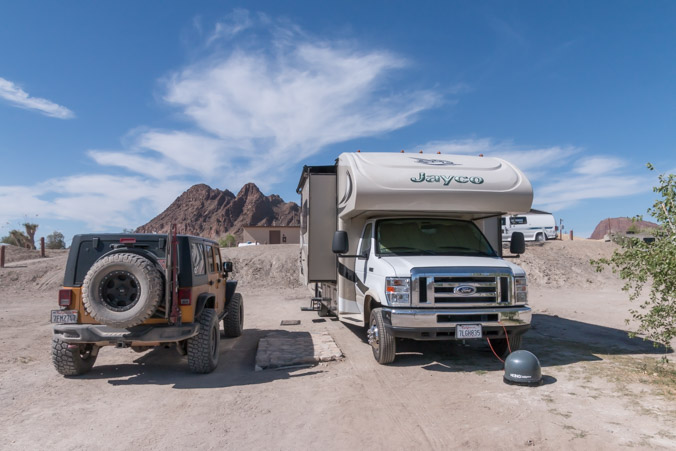 The first site they put us in was a strange pie shaped corner “space” that looked like a home for gophers and other vermin. I don’t think the owners ever come out here to see what the sites are like, very hands off, busy dealing with the motel. The gentleman was very accommodating and when we told him about the bad site, he happily moved us and let us pick our own spot. The other weird thing about the park are the random pieces of concrete, “patios” that are in no way useful. Also on the hill across from us is a water tank with a pump that runs 24/7. We didn’t notice it much when inside, except one night when it was really loud for about an hour. I wonder if the people directly below it were bothered?

There is little, to no cell phone signal which was expected.

Big Bend National Park is huge, 801,000 acres, much of it dirt roads. We decided to start our explorations at Panther Junction Visitor Center and from there drive straight out to the end of the road to Boquillas Canyon.

The visitor center has a few small exhibits and was well stocked with books and maps, including off road specific guides.

The road through the park showed surprises around every corner.

This coyote was trotting down the middle of the road, happy as could be in the early morning, I wanted to get a picture so we turned around but this car came along and scared him into the bush. I was surprised he was in the open as long as he was.

Much of Big Bend is in a valley and as such, it’s affected by haze from air pollution.

The road to Boquillas curves gently through a  beautiful landscape. 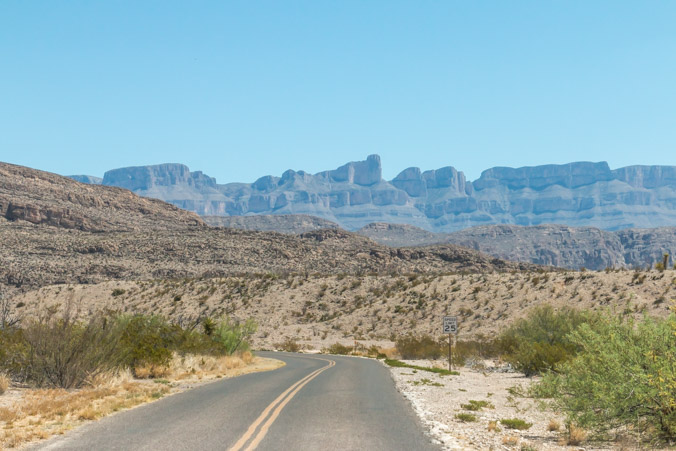 A side road leads to Boquillas Canyon Overlook.

In one direction, Boquillas Canyon is visible in the distance. 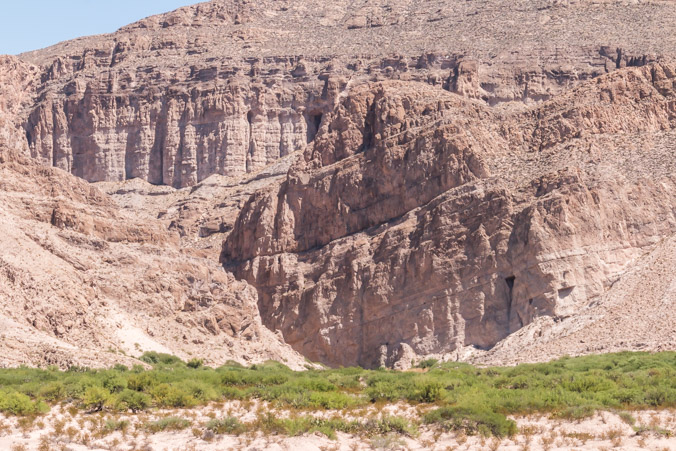 It’s hard to tell there’s an opening in the canyon where the river flows. 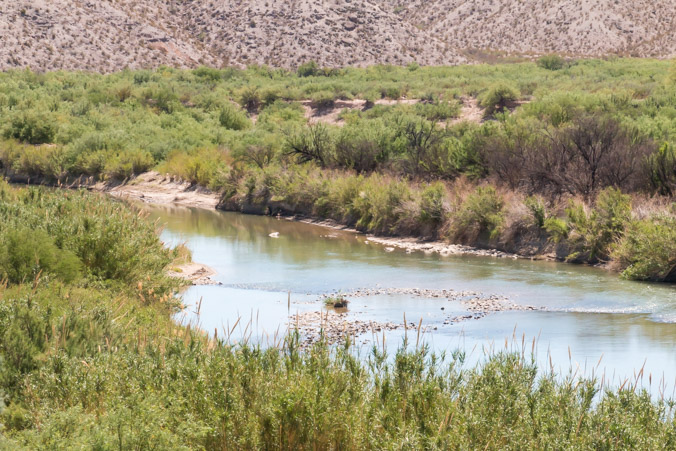 Looking the opposite direction, the tiny town of Boquillas Del Carmen in Mexico is visible on the hill in the distance. This area is very remote but a port of entry into Mexico exists.  The process is as follows: Drive to the gate, show passport, be approved to enter the country, pay a person $5.00 to ferry you across the river in a row boat. 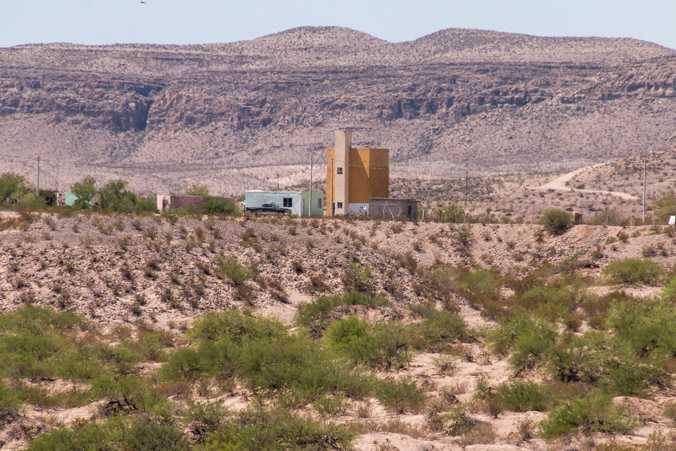 The border between Mexico and the US is an imaginary line that runs through the middle of the Rio Grande River. Almost 90% of the river is diverted for agricultural and other uses and is consequently not much of a barrier. Looking down from the lookout, Mexican entrepreneurs can be seen waiting to sneak across the river to leave wares for tourists to buy.

Items for sale include walking sticks $7.00 wire animals $5.00. Leave money in the can and before you know it, they’ve snuck back to collect it. It’s unlawful to buy the goods and the rangers try to discourage it and may confiscate any purchases but I saw many people carrying things they’d bought from the impromptu stand.

A trail head which leads deeper into the canyon can be found at the very end of the road. It’s a short hike up a cliffside staircase, down the other side and along the river into the canyon. 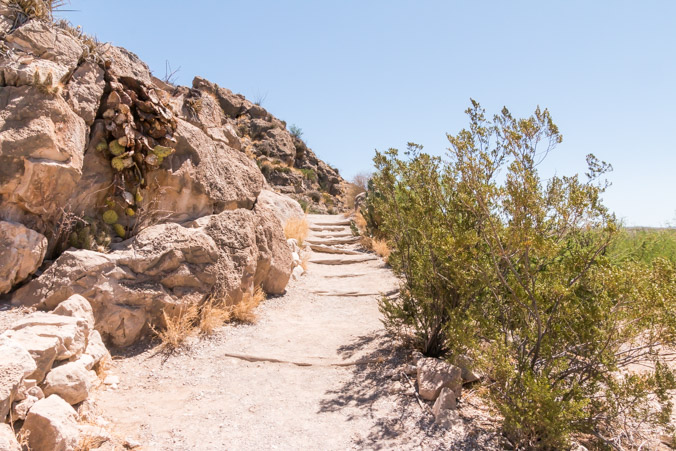 The trail starts of with some nice steps, it’s a little warm outside but not too bad, we’ve brought plenty of water. 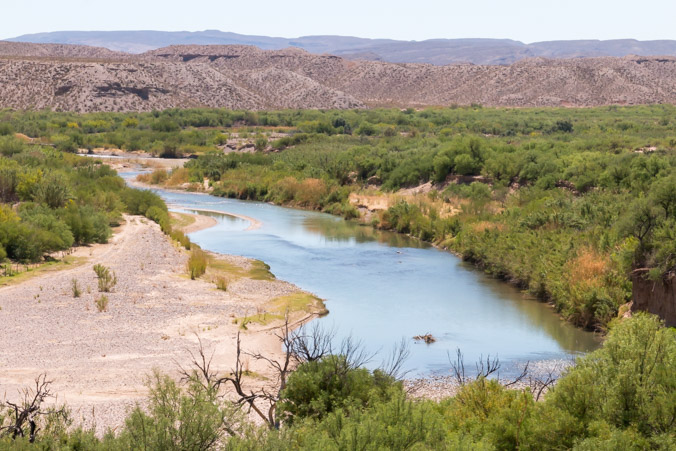 Nice view of the river from the top. 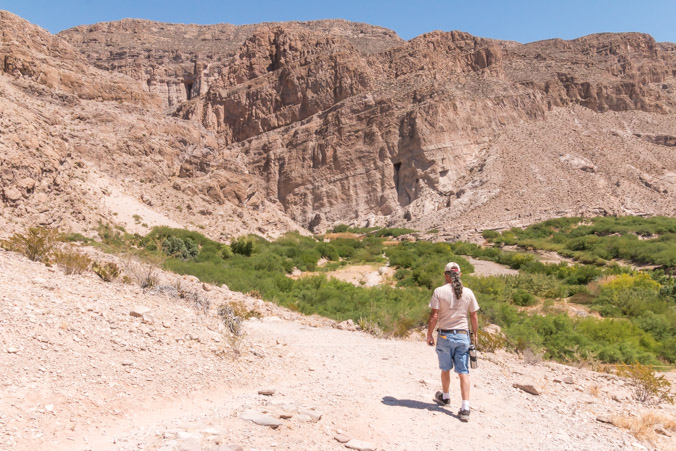 Down the other side, there were some tricky, washed out, cliff parts. It was a little tough for my weak knees.

The entrepreneurs have a spot here too.

The canyon tightens up at the end, some rock scrambling leads a little further but not really worth it. 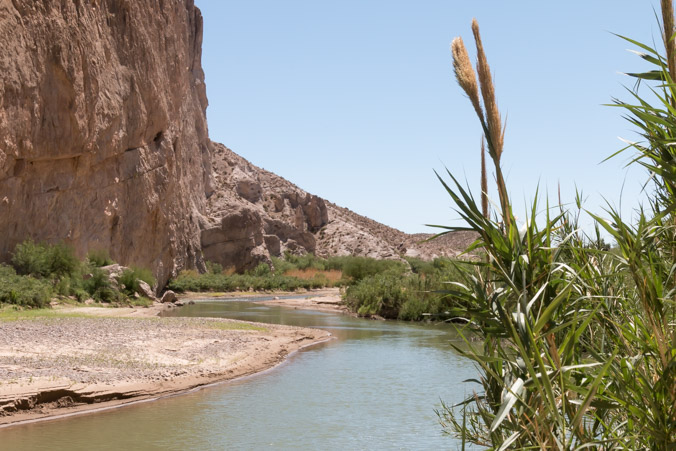 The sandbar is Mexico.

End of the road. A perfect spot for a turtle.

Jeff climbed up the 100 yards or so to explore the end of the canyon and for some reason, while I waited, the heat started to really affect me. I don’t tolerate heat well and this was the first time this year we’d had much heat. I don’t know what it is, denial perhaps, but we are notorious for not being prepared on hikes. We’re prepared six ways from Sunday in the Jeep but we never think we’re going to walk as far as we do. We’re natural born explorers, always wanting to see what’s around the next corner, we should know better. I considered it a personal win because we brought a pack with snacks and water this time. Unfortunately we did NOT bring my hiking poles, I never think I’m going to need them, my knees don’t always agree. All this was going through my mind while I was considering the return hike up the cliff. It was clear that I was going to need a Mexican walking stick or Jeff was going to have to carry me on his back.

In the amount of time it took us to walk to the end of the canyon and back, these guys had snuck across the river and collected their money and restocked their goods. There were sticks of all sizes to choose from and I found one that was just right. I named him El Sticko. Best $7.00 I ever spent in my life. 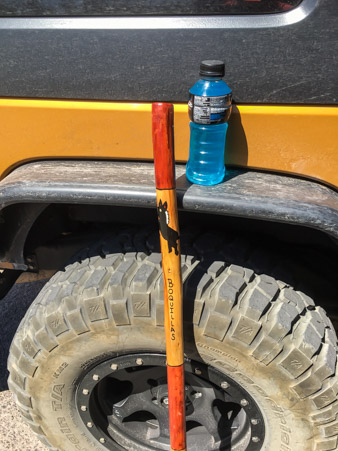 It’s because of these two items that I’m alive to tell the tale!

It’s midday, lots of daylight, our next destination is Mariscal Mine via River Road East. Dirt of course. 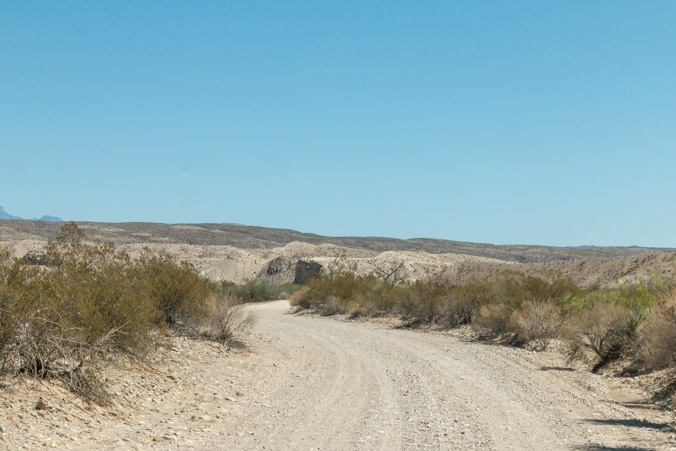 So many cool rock and hill formations. 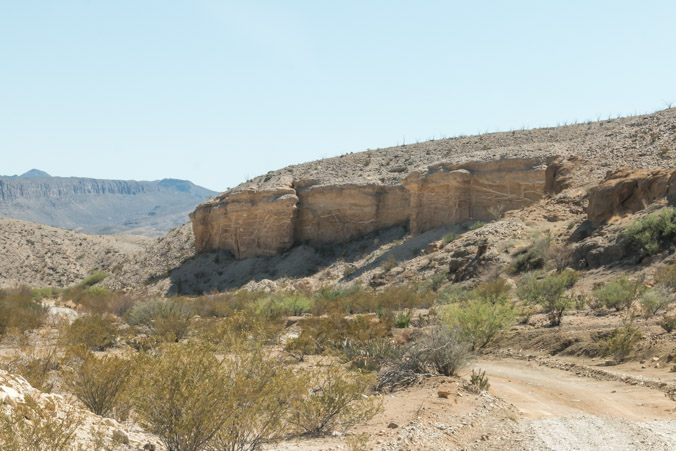 How great is this? 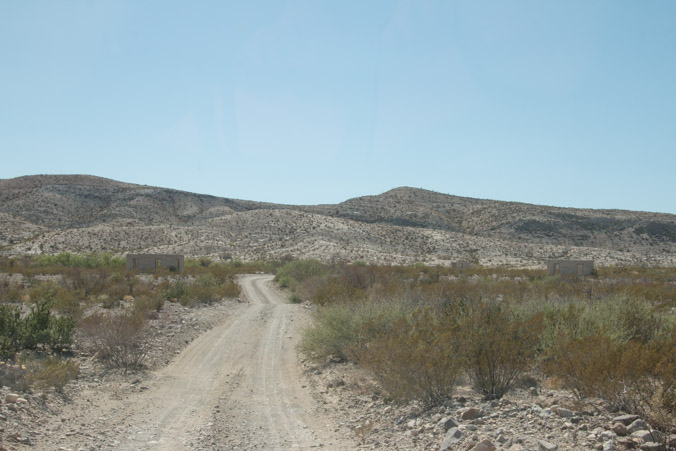 Can barely see them, they fade into the surroundings. 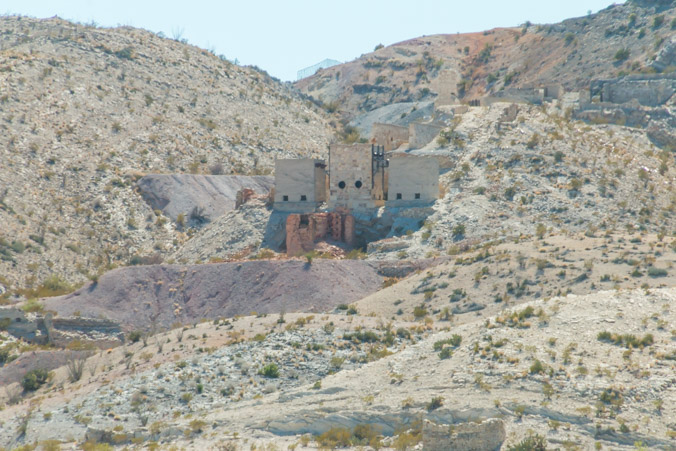 Mariscal Mine is the best preserved mercury mining site in the state of Texas. Abandoned since the 1940’s.

There are a lot of intact ruins tucked in around the hillside. 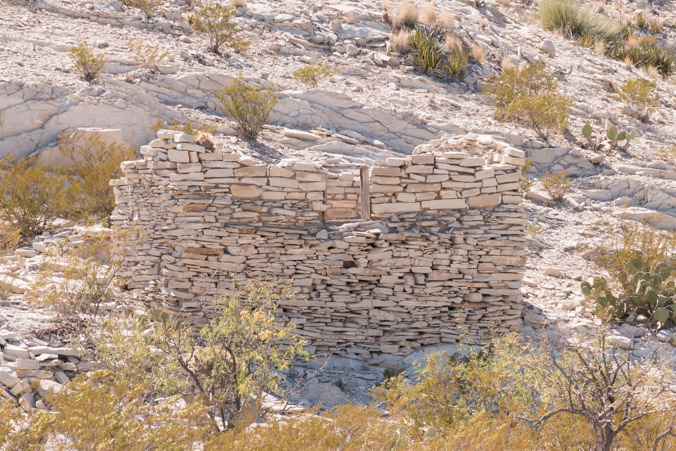 The road up to the mine has been washed out and must be hiked. 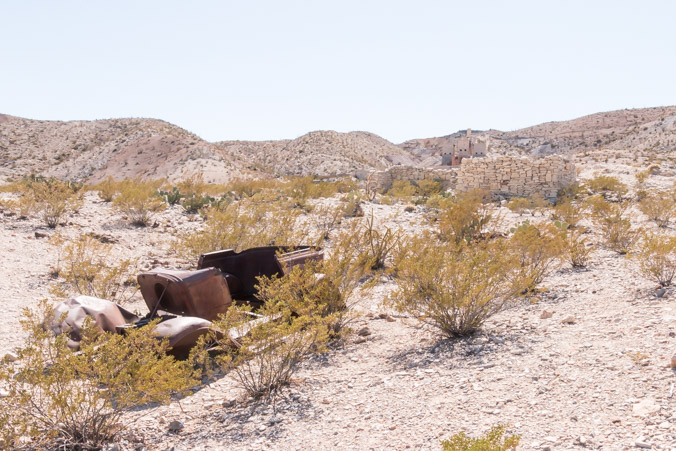 An old car from the later years. Earlier in the mine’s history, ore and goods were delivered back and forth by mule driven freight wagons all the way to Marfa.

The view gets better the closer we get.

Looking back the way we came there is a profound sense of solitude, we are well and truly alone out here. 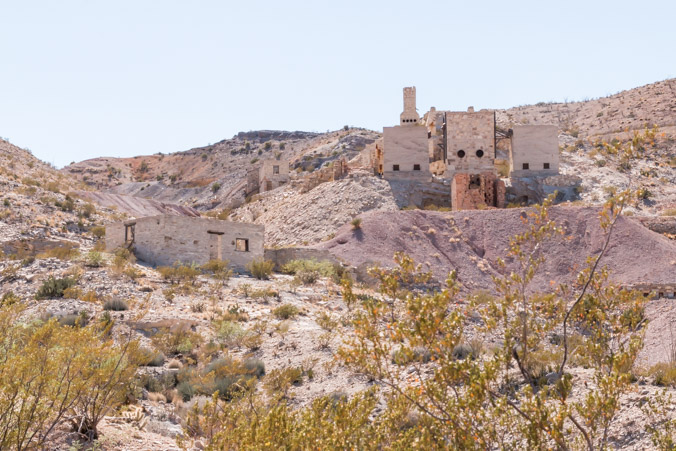 This lower building has holes where ceramic pipes connected. A brochure explaining the mines workings can be obtained at the visitor center. 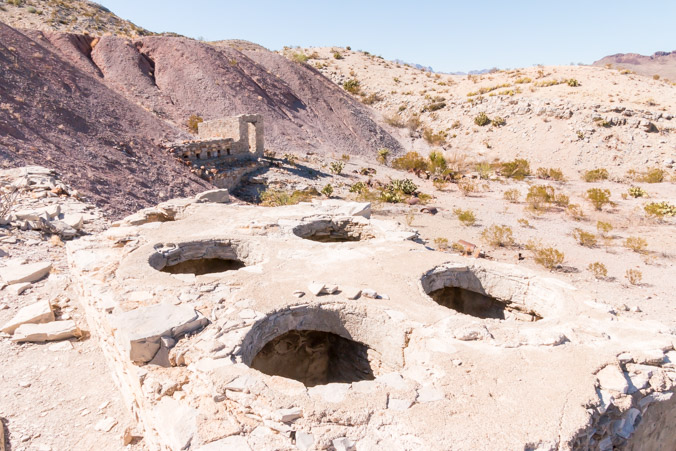 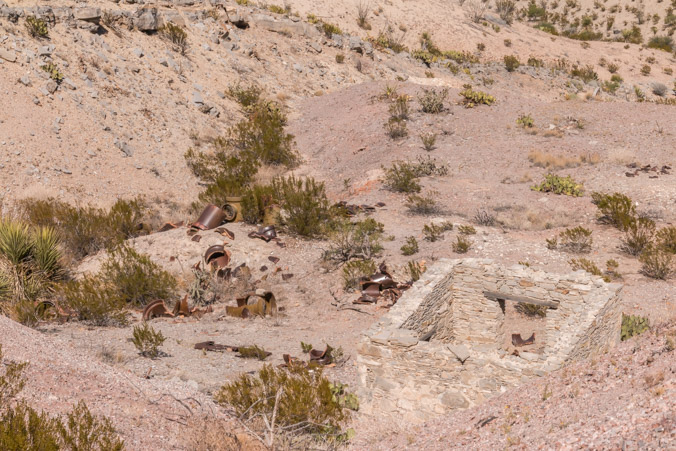 Broken pipes down below. 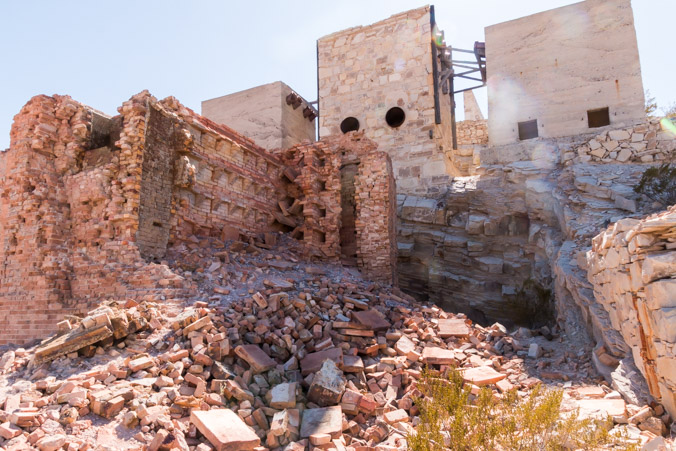 Care must be taken, do not touch the bricks, they may contain mercury residue.

Behind the mine workings, just as interesting.

The miners basically dug out the side of the mountain and used the rocks to build the structures right where they dug.

Can you see Ampy the Jeep WAY down there? Upper left corner.

There are more buildings above this but once again we’re trying to fit too much in one day, it’s time to head out.

Proof that it isn’t just rocks and mines, beautiful blooms. 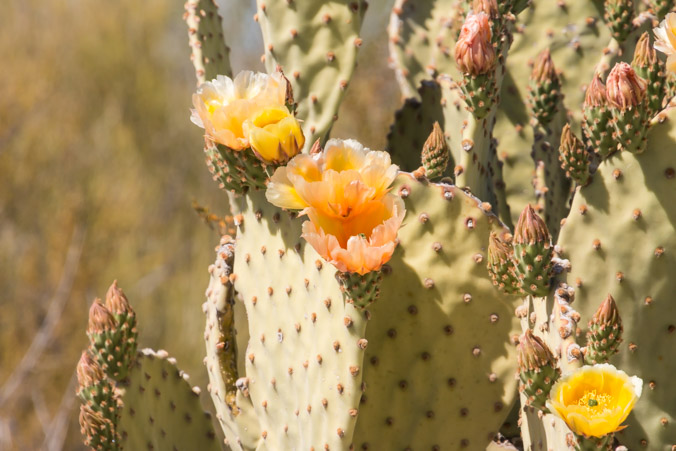 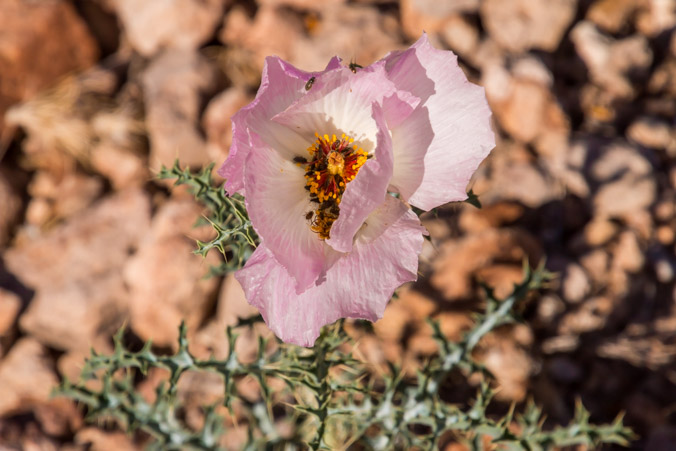 This is one of the most unique roads we’ve ever driven. From here, it starts out as a path through deep grasses.

Climbs a ridge overlooking deep folds in the mountains. 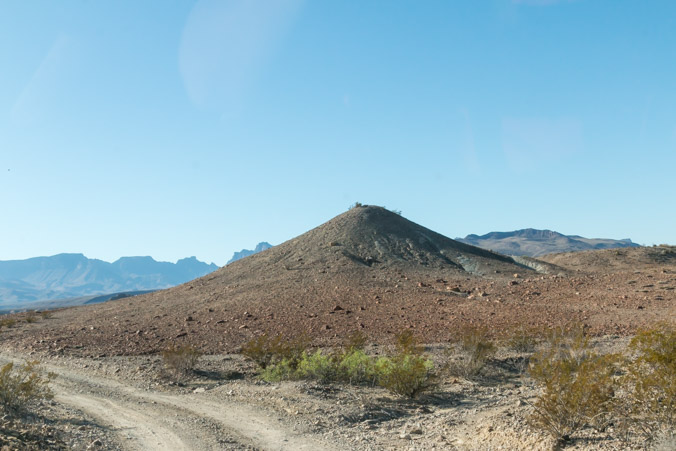 Winding into the distance. 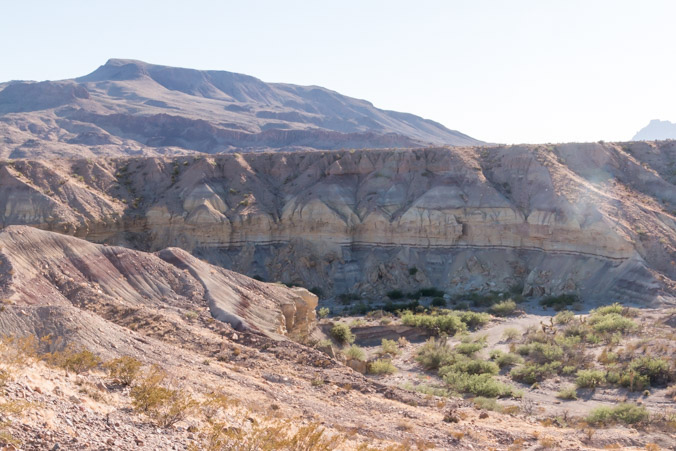 I began to refer to this road as Disneyland. It was like going from Fantasyland, to Adventureland, to Tomorrowland, every turn in the road brought a different view.

This section was full of huge boulders on the mountain similar to Joshua Tree National park but it was bouncy and tough to get a good picture.

The next section had wildflowers as far as the eye could see.

We called this The King’s Crown.

Shortly beyond this hill, the road met back up with the pavement.

Time to call it a day. Until we meet again!