At the World Of Speed Museum in Wilsonville Oregon.

We didn’t even know this place existed until we drove by late one night and saw the sign from the freeway. Apparently it  just opened in April of 2015.

A car museum is not necessarily my favorite thing to do but Jeff loves it.   I didn’t have any great expectations, cars, racing, no big deal.

I was wrong again. Add it to my long list of wrongs.

This museum was probably one of the most beautiful, state of the art, well designed museums I’ve ever had the privilege of visiting and it wasn’t just cars, there were pop culture displays, music, interesting stories, simulators and hands on experiences.

Here’s a description from The World Of Speed’s “About” page:

Located in Wilsonville, Oregon, The World of Speed is an educational museum featuring historic racecars, boats and motorcycles that tell the story of motorsports culture. Through interactive exhibits and hands on activities, the World of Speed offers visitors a behind the scenes view of the racing world. It encompasses many aspects of motorsports, including drag racing, road racing, land speed racing, motorcycle racing, open wheel, NASCAR and hydroplanes.

The really neat thing about the museum is that it’s also an automotive educational center dedicated to encouraging and sparking an interest in automotive careers for young people. It has garage bays and an archive room for research projects.

This is a peek through the door to the garage area. You could eat off that floor! 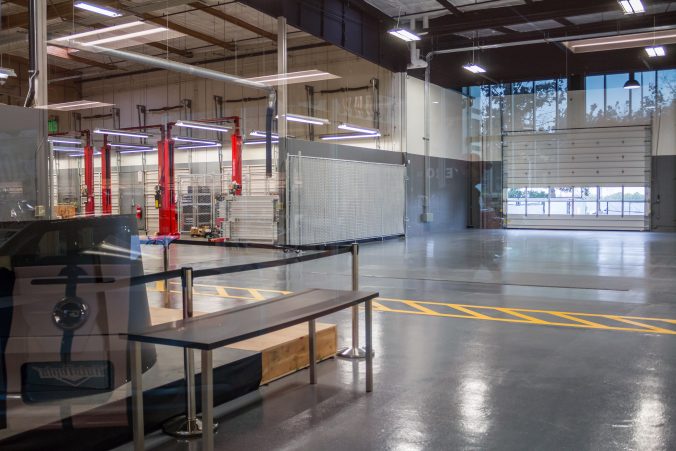 This is the children’s club, even the youngest can feel the thrill of racing. Or driving the Batmobile.

General admission is $10.00. The picture at the beginning of the article is the sight that greets you as you walk into the museum…80,000 square feet of car stuff.

The center of the museum is filled with cars, cars and more cars. 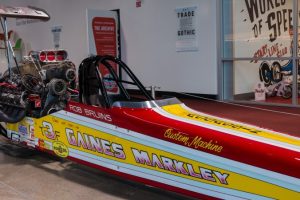 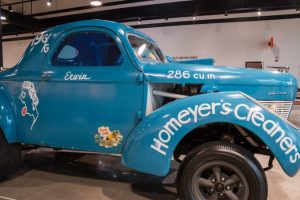 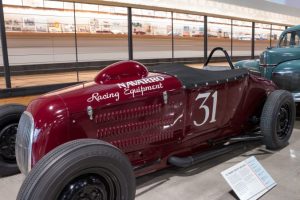 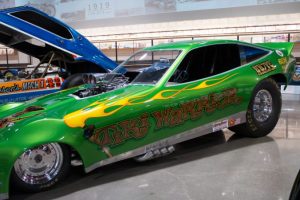 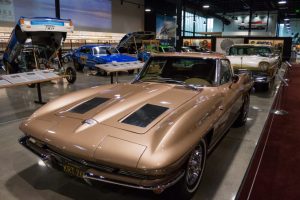 With the occasional motorcycle, VW and boat thrown in for good measure. 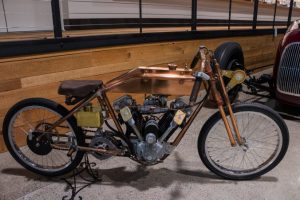 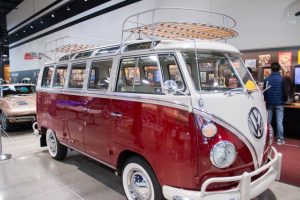 This is what happens when funny cars go wrong…

The left side of the exhibit space is dedicated to 100 years of land speed trials at places like Bonneville Salt Flats. The entire top of the wall is a video timeline and the bottom half holds an exhibit case of memorabilia.

It covers the range of speed from the very first blistering speed of 39 mph, to the “sinus clearing” current record of 763 mph.

Below the walk way are some of the Mickey Thompson speed trial cars. 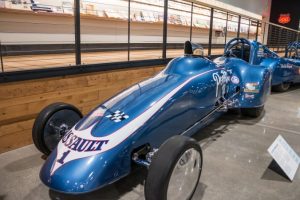 The right side of the building is dedicated to popular culture and music influenced by cars and automobile design. 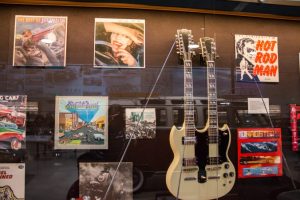 The part that fasciated me the most were the overhead speakers.

When you stand in front of one section of the display you can hear the music for that section only, even though these pods were WAY above our heads.

I especially enjoyed seeing some old friends. Do you recognize any of these?

This is a hands on display with signs encouraging you to pick them up and fiddle with the dials and buttons. 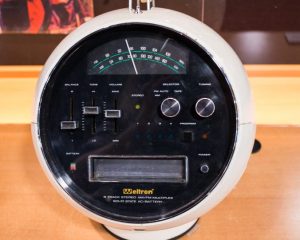 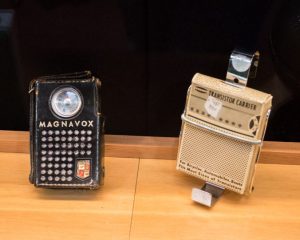 The egg chair. Always a favorite.

Here’s another reminder of the good old days… oh those desks!

These exhibits are only half of the museum. The back half has even more. 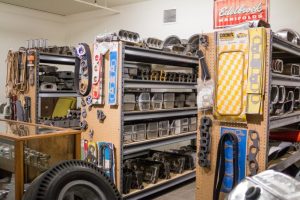 Right next to that is a vintage garage complete with “fighter aircraft fuel tank car”.

One of the best thing about this museum is their multimedia displays.

There’s a video playing which tells about the race cars which were built from these jettisoned fuel tanks. The video is playing inside a vintage radio box. It fits into the display so seamlessly that it’s a real pleasure to see and adds to the experience. 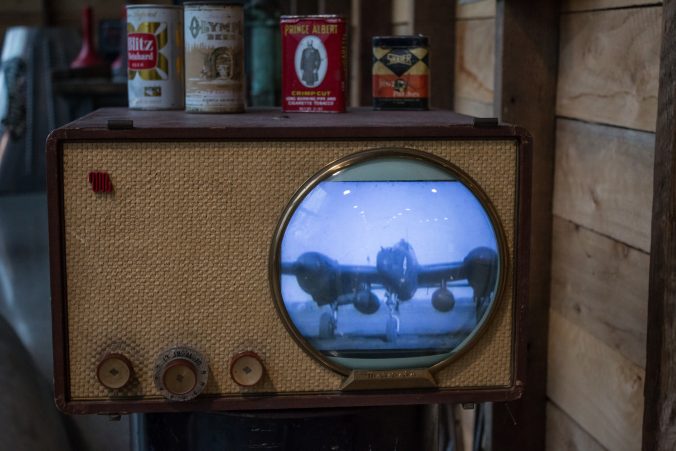 Lots of good quality multimedia throughout the museum.

The hands on section has multiple interactive examples of engine function mounted on tool chests. 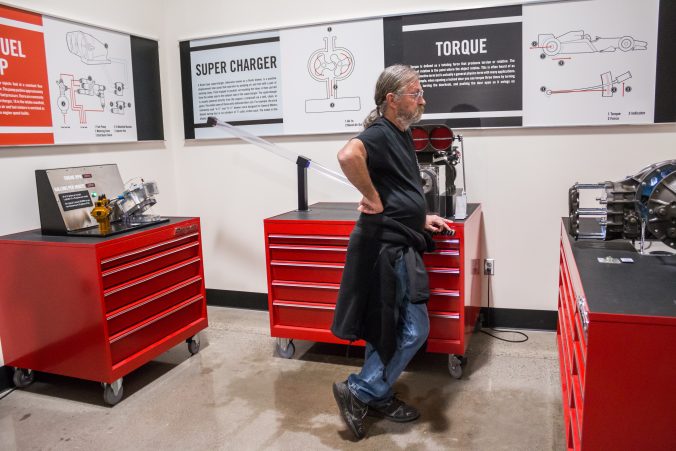 My favorite was the Nitro fuel Pump. When you press a button it makes the sound of an engine revving up and shows the difference of the amount of fuel injected during race acceleration. No wonder they get crummy fuel mileage! 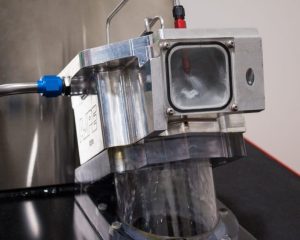 If all that isn’t enough, you can take a turn at the wheel yourself in these simulators which cost an additional $10.00 to drive. 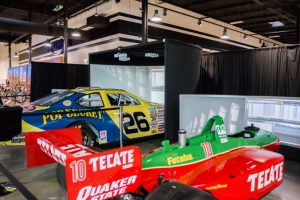 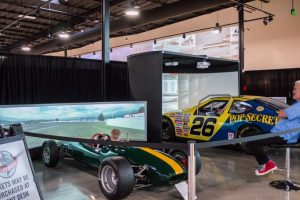 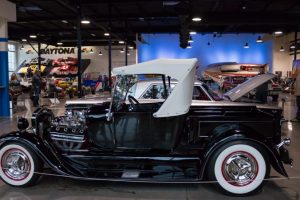 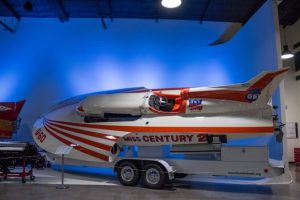 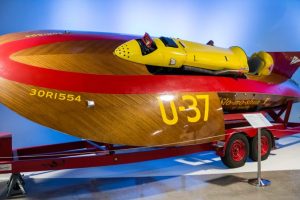 and an entire two sided section dedicated to Triumph Motorcycles.

There’ s so much!

A display of the evolution of engines, representations of the Pacific Northwest’s role in motorsports, uniforms, trophies, fire suits, newspaper clippings, the list goes on and on.

A lot of famous names are represented in the collection, Jeff Gordon, Richard Petty, Danica Patrick and Al Unser whose “Frisbee” car is the flatest, weirdest, car I’ve ever seen. It seems like it should fly through the air instead of hug the ground . 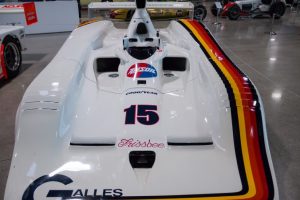 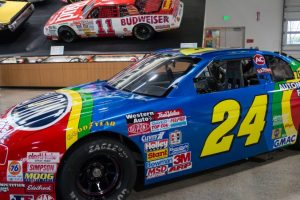 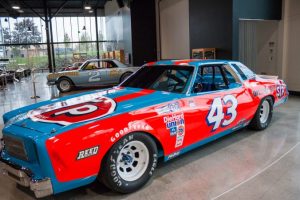 But the most awe inspiring display of all is the full sized, banked Nascar track. 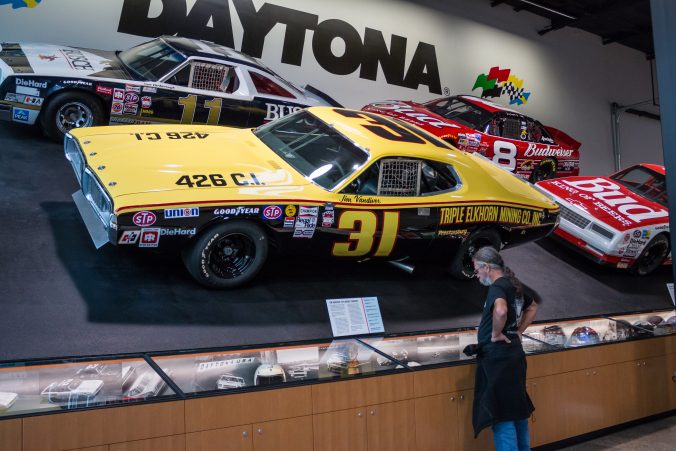 The side shows the comparison in the banking of well know tracks.

In front of it is another video monitor, this time housed in a gas pump showing some great moments in racing.

This museum honestly has something for everyone.

…and when you’re finally worn out you can have a snack in the modern snack bar.

Don’t forget to check out the well appointed gift shop featuring all things auto and get a schedule for their movie nights.

Yes, they show car related movies in the “drive in” gallery too.

Unfortunately we weren’t able to see that but I bet it’s just as awesome as the rest!

Things to do & Eat

a travel and food blog

The Fun Side Of Science