WE BOUGHT THE RV!

Jeff sold the business and for the first month we found ourselves sitting around wondering what to do with our lives.

We always said that when we retired we would sell everything, live in an RV and travel from place to place. Now that retirement is a reality we realize that we still have a lot of anchors, an entire ranch full of anchors and completely pulling up stakes would be a lot more complicated than we imagined.
We knew we wanted to travel but we weren’t quite ready to ditch it all.  The question then became, “Can we do both?”  Can we continue to maintain our current lifestyle AND spend at least half of the year traveling in an RV?

After much deliberation the answer was yes, at least for a while.  Once we made the decision to give it a try we were faced with another problem, neither of us knew anything about RV’s, in fact, neither of us had ever spent the night in one!

So, we began to research.  I read blogs and articles, we talked to people who had RV’s and eventually we visited RV lots.  SO MANY OPTIONS!  Large ones and small ones, short ones and tall ones, fancy ones and plain ones, expensive ones and not so expensive ones and the salesmen assured us that they were all wonderful…

especially the expensive ones…

they were the most wonderful of all…

In the end, as wonderful as the “expensive ones” were, we realized that we’re not “resort campground people”, we’re “find the smallest, most hidden road and go there people”.

One decision made. The RV had to be under 30 feet.

There was a problem with the under 30 feet rigs, the giant bed over the cab.  We planned on getting away from the herd, not traveling with them and that bed was just so much wasted space.

Nothing seemed quite right, until one day we found a used Jayco Greyhawk in great shape.  We liked the floor plan layout, we liked the slides, we liked everything about it and we ALMOST bought it but caution won out and we decided to wait. That night, I learned all I could about Jayco, and lo and behold there was a floor plan with an entertainment center above the cab instead of a bed…AND there was one available in Temecula about an hour away from us!

Halleluia! The angels were singing!

The next morning dawned bright and clear and over 100 degrees. We rushed out and drove to Richardson’s RV in Temecula.

We told the salesman what we wanted and there it was…

It turns out that this coach was one of a kind, (probably a show model).  It had 3 slides, two in the middle and the bed in the rear. It also had an electric awning, and electric levelers which was unheard of in all of the class C’s we had seen. It had a lot of other perks and extra’s most of which I don’t yet understand but… 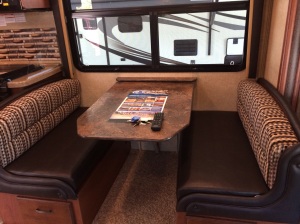 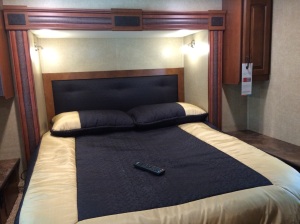 We told the salesman our bottom line out the door and he said yes and away we went!  It’s ours!

I decided to name it J-Ride.  J-Ride is Jayco’s special suspension technology but the name just seemed to fit.  Husband = Jeff = J-Ride…get it? Jay for short. Work with me here.  We have so many animals that I’m tired of coming up with creative names!

So now we wait…

I’ve stocked Jay full of stuff we probably don’t need and discovered a few products that I’m not sure how I ever lived without.  Jeff is pretending it’s Christmas and buying countless parts to upgrade the Jeep with.  He spends a lot of time in the barn tinkering and building while I grow impatient.

My father’s favorite saying for me was “Patience Is A Virtue”.

Guess it’s always been a problem!

In the meantime I will be posting some of our local trips. I’m planning to fill this blog with good memories and fun information and hopefully we’ll leave by October!

2 thoughts on “IN THE BEGINNING…”