Bisbee Arizona is a quirky little mining town, turned artists’ enclave. Full of eccentric people and history around every corner.

Today we’re in search of whatever surprises it holds.

We’ve visited Bisbee twice in the past. The first time, we took the kids on the Queen Mine Tour (an extensive tram tour through one of the old mines). The second trip was just a drive by and quick visit. This time we plan to slow down and appreciate the town, starting with lunch.

We were lucky to find a parking spot right in front of old Brewery Gulch.

Today, Brewery Gulch is a lovely courtyard area surrounded by beautiful old buildings. A picture in the museum describes it in a much less flattering way.

The 1902 San Ramon hotel sits on the corner. Santiago’s Restaurant, on the ground floor is our choice for lunch. The building itself has a very colorful history and the restaurant is the oldest continuously operating restaurant in Bisbee. 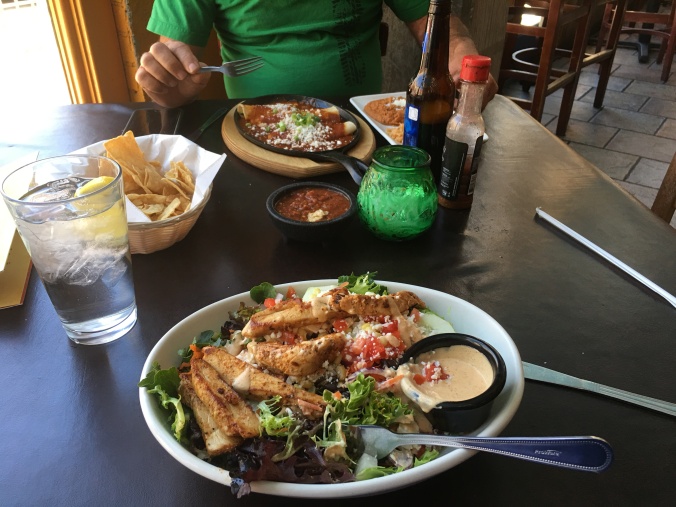 The food was excellent!

Most mining towns are situated on hills and mountains, Bisbee is no exception. In fact, the miners of Bisbee used their skills of excavation to carve out terraces above the town to build their houses on. In the early days they accessed the houses by trails and footpaths. When those trails proved to be too slippery, wooden stairs were built. During the Great depression, the WPA replaced the wooden stairs with cement.  Some houses can still only be accessed by stairs.

Stairs are such an important part of the culture of Bisbee that there are regular events that celebrate them. 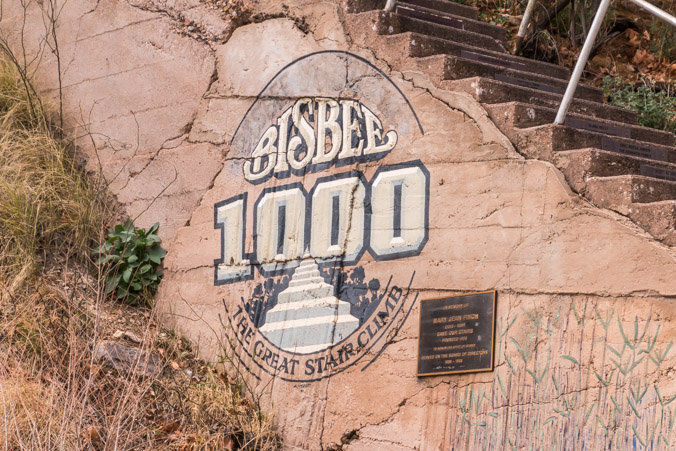 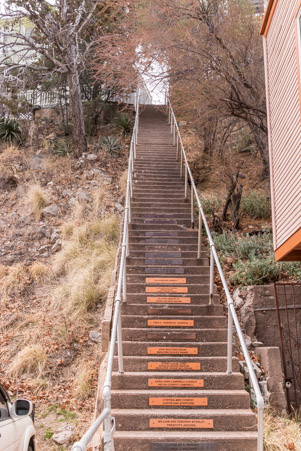 Bisbee was once known as “The Queen of the Copper Camps” and the museum in the center of town tells the story of it’s history. The museum is the first rural affiliate of the Smithsonian Institution and its displays are beautifully done.

History of the mining company, cultural history and life in town are exhibits which cover the first floor. 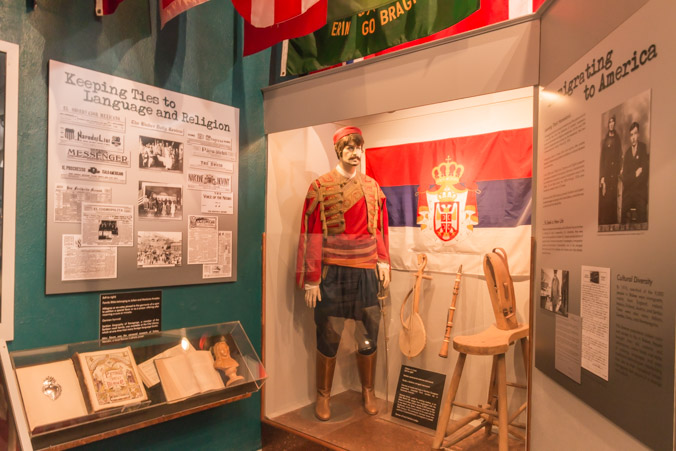 The museum is full of interesting tidbits of information.

Pushmobile races began in Bisbee in 1911. 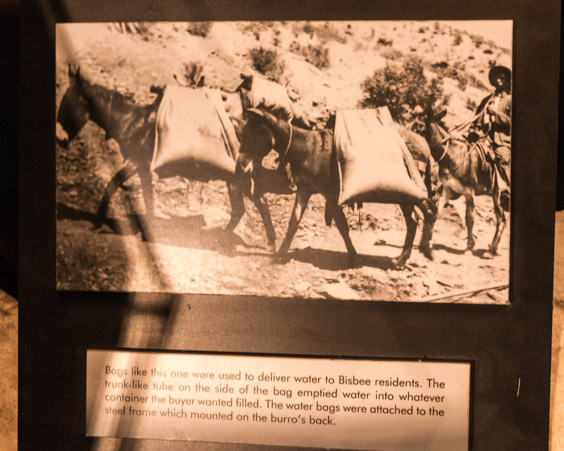 Water had to be delivered to residents by mule.

The upstairs exhibits focus on the mining itself.

Nuggets of wisdom scattered throughout.

The mines in Bisbee often yielded unique minerals. Some of the most beautiful minerals contained in collections today, came from Bisbee. 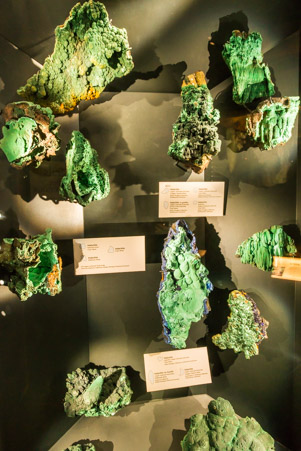 The museum has a beautiful display of these minerals. 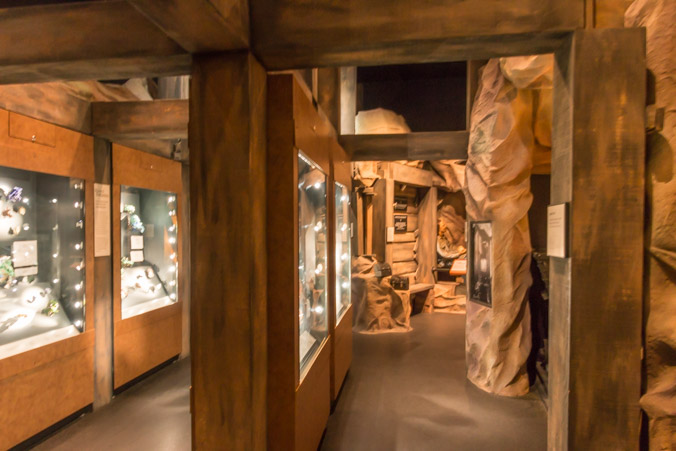 The miners often broke into caverns of crystals like the replica below. 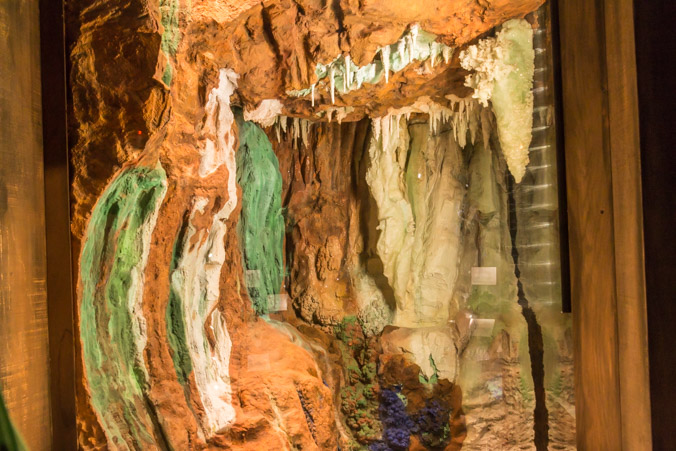 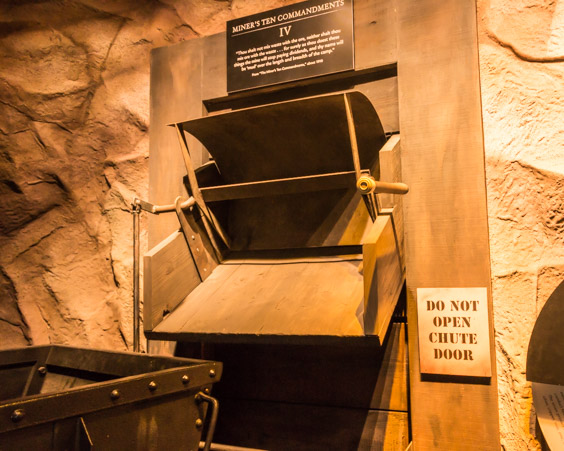 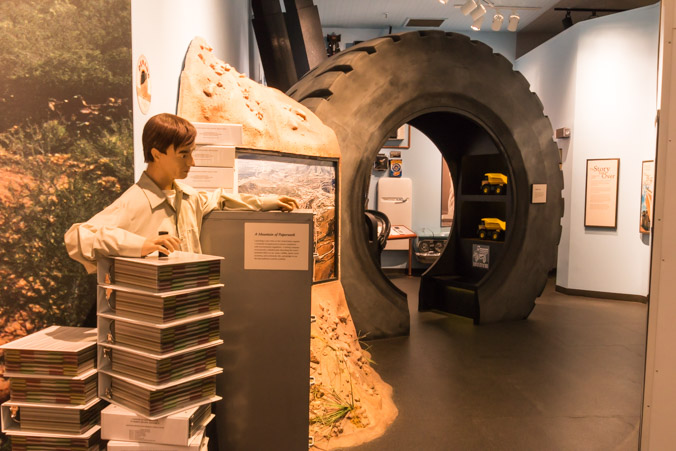 A very enjoyable and well thought out museum.

Outside the museum are large mining car displays. 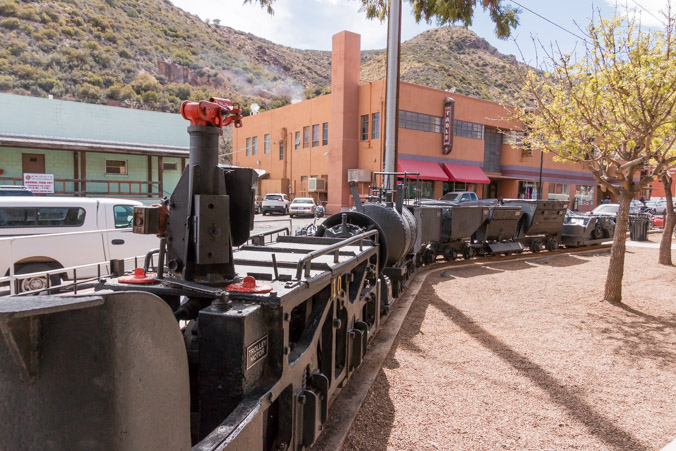 Off to the side I noticed a sign and went to investigate and as I approached I saw these giant flies on the wall.

Turns out, there was a typhoid epidemic and the town hosted a fly killing contest to rid the town of the disease carrying pests. 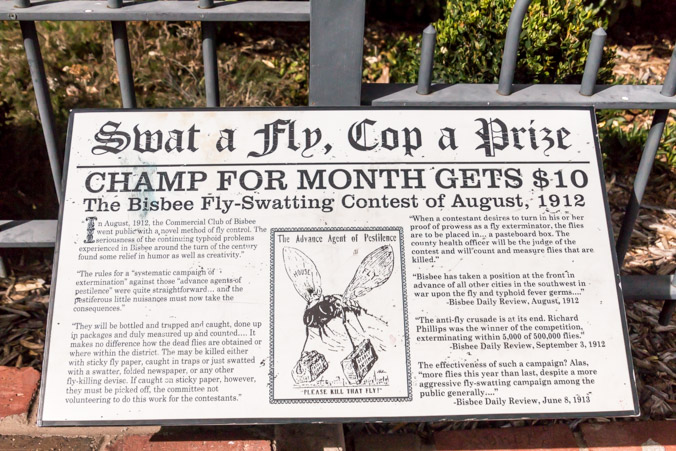 Bisbee has been redefining itself as a bohemian art town.

Art can be found in all forms.

Door handles, art and mining all in one. 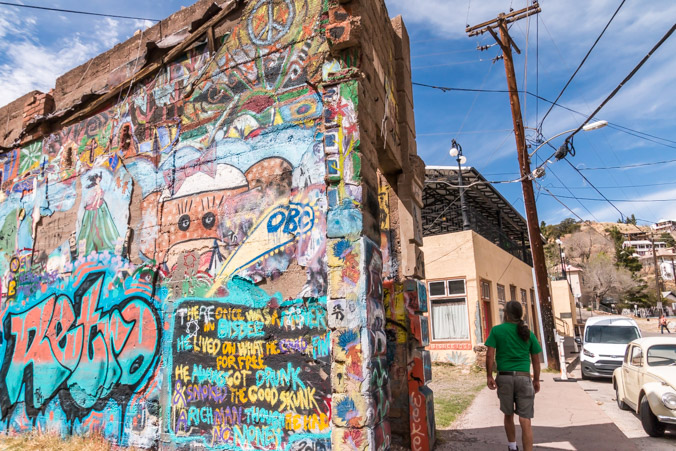 Walking around the town is an easy way to appreciate the old buildings. 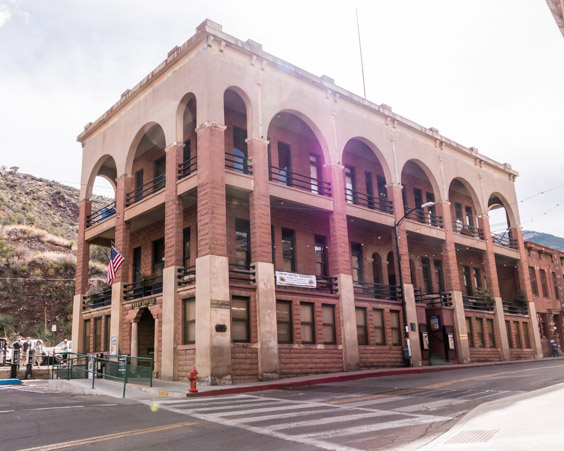 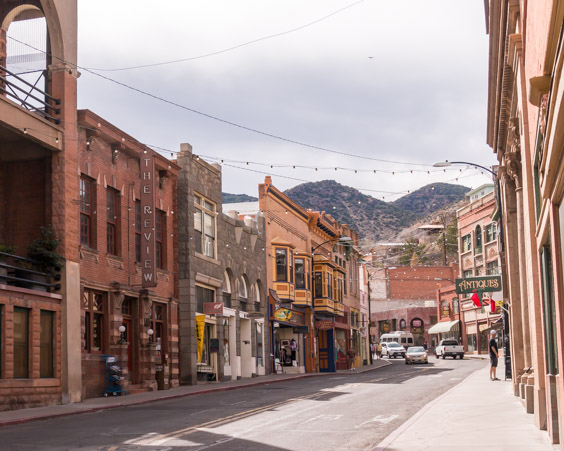 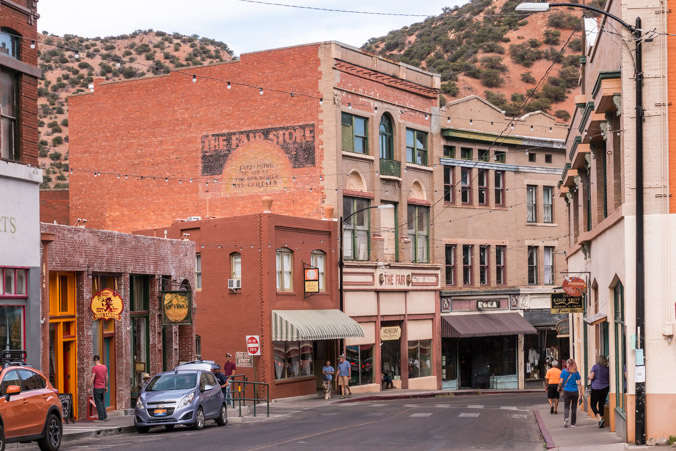 I absolutely loved the quirky nature of this inn.

Internet research leads to so many fascinating discoveries. I found out that there is a well inside this Inn At Castle Rock.  The well is called Apache Springs Well. It was originally a mine which was flooded by a spring.

If I had known that I would have asked to see it!

After finishing our explorations of central Bisbee, it was time to check out the surrounding suburbs.

First a stop at the Lavender Pit, the old strip mine at the edge of town.

The road runs along the edge of the pit and passes the three separators on the far end. Such great looking structures.

The “town” of Lowell Arizona, sits at the south end of the Lavender Pit. Lowell was once a sizable mining town but the majority of the original townsite was consumed by the Lavender Pit Mine during the 1950’s. All that is left today is a small portion of Erie Street along with Evergreen Cemetery and Lowell Middle School.

A devoted group of volunteers in Lowell have founded the Americana Project. They’re restoring Erie Street as a living snapshot of a different America, an earlier simpler time. Today you can drive down the street and view the ongoing work. 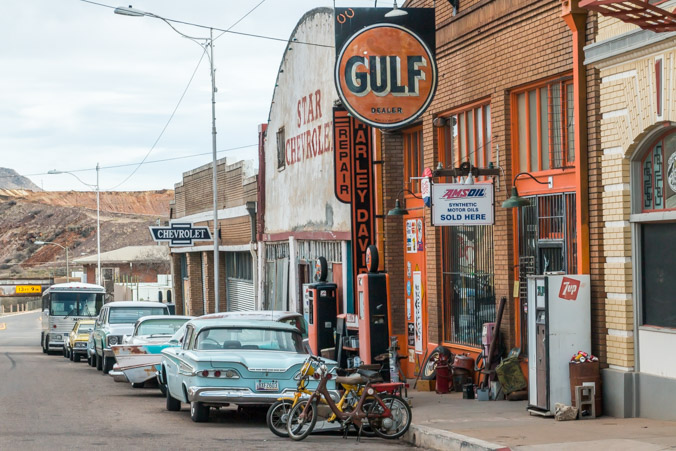 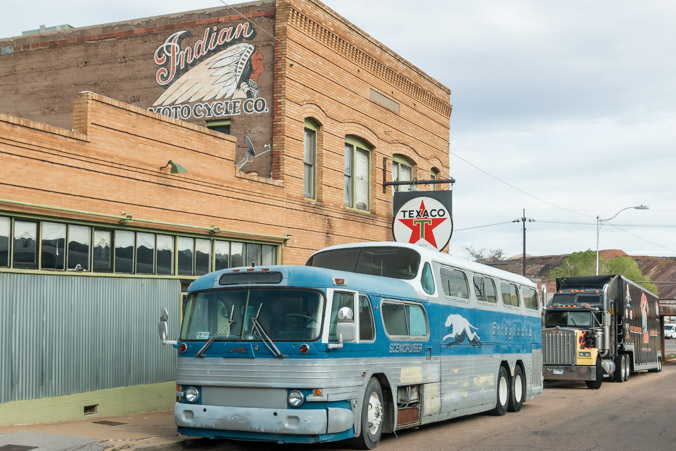 Such a cool place!

You can even rent a vintage motorhome to stay in at Shady Dell.

I heard that there are 10 mining head frames still visible in and around Bisbee, so we went in search of them.

This one right above the cemetery. 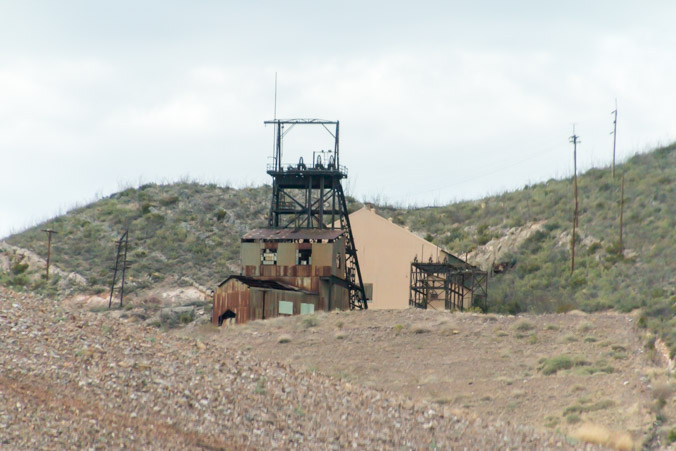 I think we eventually found 9 of the 10.

Once again, it’s getting dark and it’s time to say goodbye to the Queen of the Copper Camps, until we meet again.